The following is a guest post* by Simona Aimar, a lecturer in philosophy at University College London, in which she shares a dialogue between Socrates and Donald Trump on the subject of women. Dr. Aimar also has a blog, and on Twitter she’s @aimar_simona.

The prospects of having a productive dialogue with President Trump do not seem bright. Here is a man who rejects the norms of rational discourse, furiously insists on being treated with deferential respect, and frequently lies. He even denies obvious truths such as the relatively small crowd size at his inauguration. No wonder the Oxford Dictionary word of 2016 was ‘post-truth’.

Philosophers have long worried about influential people who do not value truth. Plato thought many orators at his time were of this sort. In many ways, Trump would an ideal interlocutor for Socrates in Plato’s dialogues. Like some of these interlocutors, he’s boastful, a quick-answerer, and he claims he is smart and knowledgeable.

Unlike most of us, Socrates doesn’t run the risk of hastily dismissing views he dislikes. Since he thinks he knows nothing, he keeps asking alleged experts to define the thing they’re supposed to be experts on. He presupposes no right answer from the start. His goal is to think things through with others, rather than for others.

It seems fitting to wonder how Socrates, the person who has long been the icon of many of the norms of rational discourse, would relate to Trump. Two days after the protest, Trump cut funding for abortion services worldwide. He must think himself competent to make health decisions for women (and others) at risk of unwanted pregnancies. Would he give Socrates the knowledge he longs for?

TRUMP: Thank you, Socrates. By the way, you are the first person in the media to congratulate me. Can you believe it?

SOCRATES: Interesting. But I am a philosopher. I am not in the media.

TRUMP: Exactly. Have you seen how the media keeps saying false things about me? I have a running war with the media. Remember when they illegally recorded me talking about women?…Very unfair!!!

SOCRATES: Yet many women voted for you in the end.

TRUMP: Women love me. Very many high quality women want to be with me. Very, very many.

SOCRATES: How fortunate you are, my excellent fellow! I don’t win that much with women, alas.

TRUMP: Let me ask you a question: how many women have you been with?

TRUMP: Are you sure? ‘Cause that’s not what I heard. I heard you chase men.

SOCRATES: Who told you that?

TRUMP: Doesn’t matter. I heard it. But if you want to understand women, nobody, nobody understands women more than I do. I know a lot about women.

SOCRATES: Well, this task seems really hard to me. I’ve investigated it for a long time and still don’t know anything about the subject.

TRUMP: Trust me—I am like a smart person. My IQ is one of the highest.

SOCRATES: Oh heavens, how marvelous! What a great blessing! Then do not hesitate and tell me: what is a woman?

TRUMP: That is the dumbest question anyone has ever asked me! Boy, I thought you were supposed to be smart.

SOCRATES: Why is that a dumb question?

TRUMP: Because a woman is what I grab by the p***y. When you are a star, they let you do it.

SOCRATES: By the dog, Mr President, that’s a horrible thing to do and say!

TRUMP: Anything. I can do anything.

SOCRATES: Also answer my question properly. So far, you did not. You told me what you do to a woman. But that’s not what a woman is, is it?

SOCRATES: Impressive. Maybe he could have helped us.

TRUMP: Nah, I am smarter. I’ll give you one more definition of woman, OK? I am so generous. A woman is Melania. That, I can tell ya.

SOCRATES: Well, I don’t think this works. After all, Melania an example of a woman. But Hillary is a woman too. And we certainly shouldn’t say that she is Melania, should we?

TRUMP: Crooked Hillary is absolutely not Melania! That’s not a pretty picture! Such a nasty woman! I mean, now I got elected and we don’t care. I so much respect her.

SOCRATES: Are you telling me that you actually respect Hillary?

SOCRATES: This is excellent, my nice fellow! But how can we say that, if we haven’t yet established what a woman is?

TRUMP: Wrong! We established it twice.

SOCRATES: Help me out one more time, would you? Is there another woman in your life?

TRUMP: This is none of your business! My mom, OK? Fantastic mom.

SOCRATES: Great. So Melania, and your mother. What do they have in common?

TRUMP: They are both immigrants.

TRUMP: Is that it? All women are immigrants?

SOCRATES: I suspect you wouldn’t like the consequences of that.

SOCRATES: Before you said you have tremendous respect for women.

TRUMP: Absolutely. I don’t even have to wait for them to get here. I can grab ’em where they live.

SOCRATES: Such an impious conclusion! This reasoning must have started from false assumptions.

SOCRATES: We must have accepted some falsehood as true. From it, you correctly inferred a false conclusion.

TRUMP: We have a protester!

SOCRATES: We are outside, Donald.

TRUMP: Were you paid $1500 to be a thug? I’ll pay legal fees to whoever decides to sue you. Lock him up. Lock him up!

SOCRATES: Wait, my friend, don’t send people after me! I am frightened. I was just trying to find out what a woman is…

TRUMP: I guarantee you, I am getting you a special prosecutor. We are having a total and complete shutdown of people like you. You’ll soon be in jail!

SOCRATES: Well, maybe the time has come for me to go. I’ll do better to leave you alone, rather than subject you to further questions and give you pain by such an examination. However, I do have many other things I’d like to discuss with you soon. Things like race, climate change, immigration…

TRUMP: Boring! Can’t we talk about something interesting?

SOCRATES: I’m sorry, Donald, but some topics even I find too puzzling. 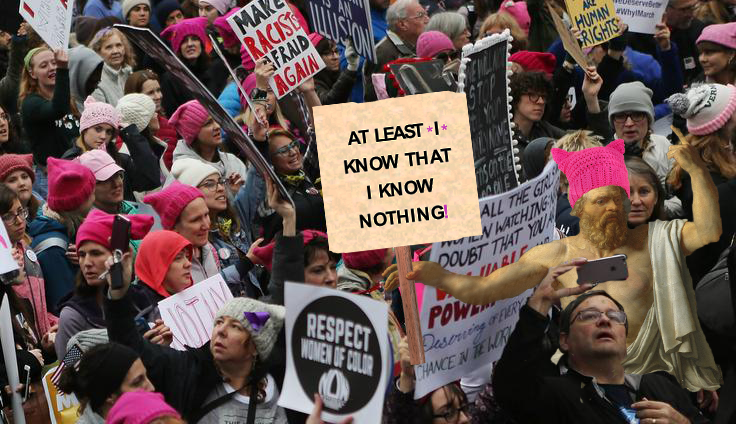 I think Trump wins this one, because Socrates’s question is kinda dumb. Average vet is awesome with cats but it’s not like a vet could define the word “cat” in a way that would satisfy Socrates.Report

It seems that you too must have accepted some falsehood as true.Report

I found this to be a pretty good read 🙂 funny and scary at the same time.Report