Sally Haslanger, Ford Professor of Philosophy and Women’s & Gender Studies at MIT and former President of the Eastern Division of the American Philosophical Association (APA) has issues a challenge to fellow philosophers in a public post on Facebook. Here’s an excerpt:

OK, so I’m pissed off, and this is what happens when I’m pissed off. I hear people in our profession complaining about how little diversity there is…right, got it. It is SO TRUE. But some of us have been working on this for lifetimes, and there is NO MONEY to support diversity initiatives in the APA. (Do you realize that now the APA can only afford $20K per year for diversity initiatives? This is PITIFUL.) So I hereby challenge each philosopher who reads this (or who reads the reposting of it) to get at least 50% of their colleagues to commit to $50/year for 3 years in THIS FUND. I’m serious. You make the commitment. You do it. I am not joking… P.S. the Mellon grant ends in 2017, which is this year folks, and many of us are busting our butts to raise money for 2018 forward. We need you now.

The fund she’s referring to is the Fund for Diversity and Inclusiveness, which addresses the lack of demographic diversity in philosophy. You can contribute to it here. 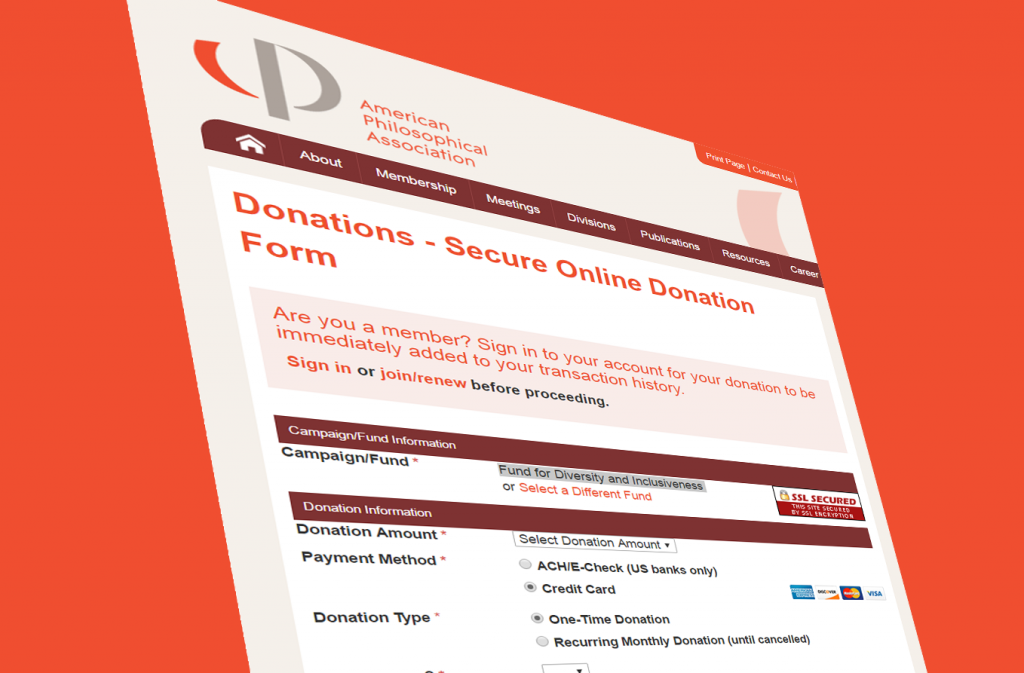 Dear all: trusted friends have communicated to me that my message above has a bullying tone. For that I apologize. I was having a moment. So let me now try to make my point with an argument. It is legitimate sometimes for people to make demands on others. I see my message as making a demand. When is this appropriate? Brendan De Kenessey has helped me think about this. Consider a choir. Suppose I am a member of the choir and allow others to do all the work of organizing it. I care about the choir. I benefit from being in the choir. But they are very good at organizing. So I let them do it. But at some point, those doing the organizing get tired, or maybe run out of money for photocopying music, or have other immediate demands on their time. They ask me to do some of the work (or contribute to the fund for photocopying or whatever). Someone needs to step up or the choir will degrade or even fall apart. This, I believe, isn’t just a request. It is a legitimate demand. And if I refuse, or ignore them, I am doing something morally wrong. It may be that I can’t afford to make a contribution to the photocopying fund. I totally get that, but then the question must be: am I pulling my fair share? Is there SOMETHING I can do to help? I also realize that there are many who ARE pulling their weight. My worry is that it is exactly those who are pulling their weight who will feel the pull of my challenge. That’s not fair. It is time that we all take ownership of this problem. We are a profession. We are a group of people involved in a collective endeavor, and it benefits each of us that the endeavor be successful. I deeply believe that it will not be successful unless we increase diversity. This is both for epistemic reasons, but also practical reasons. Universities are changing and the role of philosophy in the university is in question. Unless we find ways to engage issues of broad public concern (in addition to the esoteric questions we love), we are not going to thrive as a profession. So if my rhetorical excess offends you, I apologize. I hope this helps. If you cannot afford to contribute, I understand (the appeal was to full-time faculty, and only 50%, knowing that many philosophers are desperately underpaid). If you are already contributing, e.g., in your teaching, or your professional activism, or whatever, THANK YOU. I know, however, that there are many out there who care, but are letting others do the work. I am now making a demand on you: do something. And thanks to all who do.Report

All of this excessive outrage looks a lot like moral grandstanding.Report

And also lazy and indicative of hyper-sensitivity.Report

If you’re actually making the stronger one, you’ll need a lot more evidence.Report

If women / PoC raise problems they *themselves* have faced — e.g., sexual harassment, being ignored in class, being sexualized by peers, etc., not being invited to conferences in which they are expert, etc. — they’re accused of not really having suffered from such discrimination (“is it really that big a deal?”), or as labeled as “elite” in other ways which supposedly renders their complaints moot (e.g., “Your PhD is from Harvard, so you can’t really be suffering?”).

If some philosophers attempt to rectify/draw attention to injustices committed against *others* — as I presume Sally is doing here, as she herself is not going to personally benefit from these important initiatives — they’re labeled self-righteous or “moral grandstanders.”

I think the moral for those interested in improving philosophy is just this: you’ll be criticized no matter what. Ignore detractors and keep on trucking.

Sally, thank you for bringing attention to this important issue. I really hope philosophers who have the funds should heed your call.Report

There is reason not to donate to this fund. Take a look at the projects funded under the 2016-17 “Small Grant” program:

“Each year, the APA Eastern Division provides $25,000 for the APA’s Small Grant Program. This year’s grant application process was quite competitive, with 15 proposals requesting a total of $61,785 from our $25,000 grant fund. The following seven programs will receive funding:

However, some think that diversity is only one of a number of issues troubling professional philosophy. The threat to tenure, the academic job market hellscape, and the disconnect between graduate training and in-demand teaching skills are all areas where the APA could do some good. That the APA has chosen to largely ignore these issues in favour of a very narrow range of projects is irresponsible. Perhaps they didn’t receive any proposals concerning these topics, you might object. Then it’s the APA’s duty to get the ball rolling.

I don’t feel alienated by the APA’s focus on diversity. The APA should be focused on that sensitive issue. But there’s a difference between focus and myopia. By funding diversity initiatives to the virtual exclusion of all else, the APA has lost my confidence.Report

Tim, I fully agree with you that diversity is not the only important social issue plaguing philosophy. I also agree that the APA should do more to improve the “market hellscape” as you call it, e.g., by challenging the adjunctification of our discipline.

But the Small Grant proposals you cite do not show that the APA favors diversity issues *over* other important issues such as market placement & anti-adjunctifications. To think that this initiative chose diversity *over*, say, a pro-adjuncts programs, we’d need to know that they rejected such proposals over some of those accepted. So we have no reason to accept your claim that we have no reason to support the Small Grant program because of it’s supposedly narrow focus on diversity to the exclusion of other issues.

Also, in the past, the Small Grant program has, I believe, funded the Academic Placement initiative to help track how well programs actually place their grads. So, that seems helpful for improving choices prospective grads make. So, they’ve helped fund at least some anti-market-hellscape proposals made. Perhaps there just haven’t been that many others of that stripe.Report