Via the interesting and often rather amusing Twitter feed of Nolen Gertz, a philosopher at the University of Twente, we learn of what is surely just some of the work that the U.S. Central Intelligence Agency (CIA) has done on philosophers. 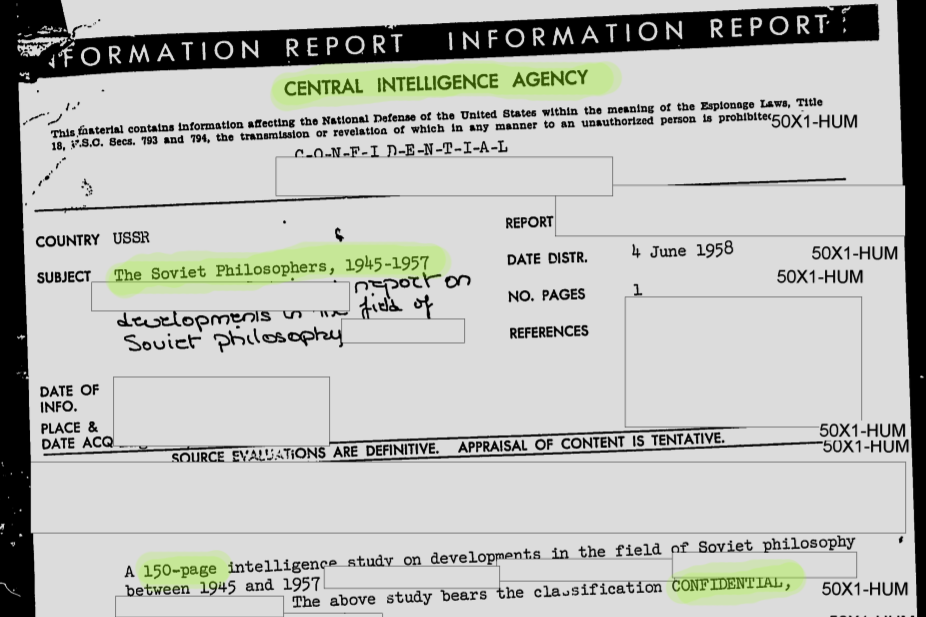 There’s a 150-page formerly confidential report on Soviet philosophers in the dozen years following the end of World War II. It begins with a politician’s plot to “jerk the professional philosophers out of [their] position of entrenched independence” and goes on to discuss Marxism, Stalin’s work in linguistics, attempts to create a “special socialist logic”, the history and philosophy of science, the politics of logic (“the translators of Tarski were attacked for their uncritical approach, and the dangerous connection of mathematical logic with neo-positivism was pointed out as a warning against overenthusiasm”), the “de-Stalinisation” of philosophy, Eastern philosophy, and more.

“France: Defection of Leftist Intellectuals,” a 1985 CIA document, “focuses on the changing attitudes of French intellectuals and gauges the probable impact on the political environment in which policy is made.” The report discusses “the New Philosophers,” a “coterie of young intellectual firebrands” who had been “assailing the French left as dangerous and implicitly totalitarian.”

Another document (from 1976) reports that the French newspaper, Liberation, founded with support from Jean-Paul Sartre, published a list of 32 alleged CIA agents in France and had announced plans to expose more, prompting Gertz to quip, “Sartre started Wikileaks.”

Has anyone else unearthed other philosophy-related documents authored by or for the CIA or other intelligence agencies?

And what, if anything, are they saying about today’s philosophers?

Well, there are the FBI files on Carnap: https://vault.fbi.gov/Rudolph%20CarnapReport

The FBI has a file on Carnap: https://vault.fbi.gov/Rudolph%20CarnapReport

Perhaps there is no agency or set of agencies who have imbibed the kool-aid of psychedelically enhanced paranoia research, or pierced the mundane atmosphere of communication research, but research alone implies development, and where there is government there is advanced organization. The portrayal of government indicates that it is only interested in maintaining dumb peace against possible outbreaks of violence, or regulating immoralities to the satisfaction of dominant popular opinions. But I like to imagine that there is real intelligence agency hidden somewhere within the structures of intelligence, doing real thinking. Real intelligence concerns things universal and beyond the edges of a the world as it is, for example the inherent intelligence of imaginative variation on the delimited given, or of speculative metaphysics on delimited physics. We might be far removed from rule by philosopher kings, but I sincerely hope there is real philosophical thinking at the hidden helm.Report

It’s not a good start that the file on Rudolf Carnap misspells his first name (the documents inside spell it correctly).Report

The CIA had a file on Chomsky.Report