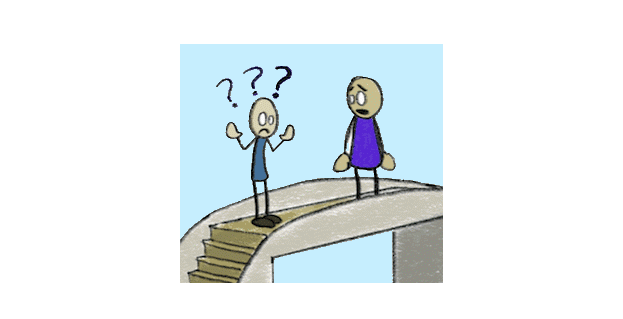 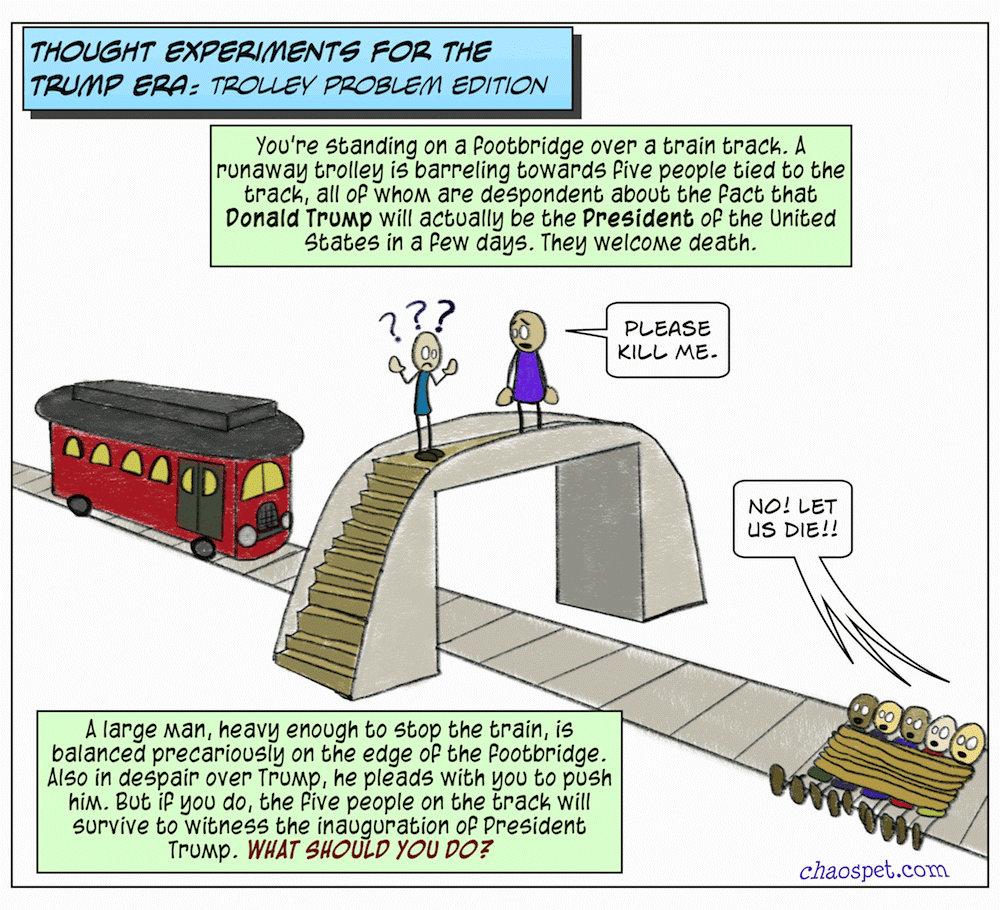 this reads as “I’m in a profession that ostensibly questions the foundations of everything, ever, but I struggle accepting the outcome of a democratic process and the reality of what half of my country thinks.”Report

That’s an interesting “read”, but one thing really has nothing to do with the other. Sometimes democratic processes produce very bad results that are difficult to accept – even for people in professions that ostensibly question the foundations of everything.Report

That quote/answer alone is reason to be despondent about the fact that Trump will actually be the president.Report

If you take the people in the cartoon to represent Americans in general, then yes, some of them should be happy instead of despondent. But these could just be a collection of liberals who have gone to the railroad tracks to commit suicide. You will agree that a lot of liberals aren’t happy right now. I know I’m not. (The issue of whether we ought to be depressed or not seems beside the point, unless I’m misreading the cartoon and it is depicting (with comedic exaggeration) how we should be acting now. I read it as saying, “a lot of people are despondent right now”.Report

I love this cartoon, in the best tradition of ingenious conceptual inversion.

And I just love John Lewis for his stance this past weekend, and not merely based on his real-life moral authority to criticize Trump. Trump won by three states’ electoral votes representing a total of 0.066% (80k out of 120m total votes) of the electorate, and though I’m no statistician, I suspect a case could be made that, except for the interloping of the Russians, abetted by Comey, Trump could not have won. Gotta love those close world counterfactuals! And let the threaded-blood-letting begin, as is inevitable.Report

It hasn't been updated in a while, but the bottom half of my teaching page has a cluster of resources for undergraduate students about academics

Preston Stovall on Teaching and Writing About Abortion in Idaho (and elsewhere?)

Maybe I'm missing some glaring detail, and I confess that it's late on St. Vaclav's day so I'm not at my level best. But why […]

A few years ago a good friend had a book published by OUP. He warned me before I bought a copy that the editing 'wasn't […]

Corrected versions of my Introduction to Formal Logic and Introduction to Gödel's Theorems, which were both originally published by CUP, are freely downloadable at https://logicmatters.net. […]

Fancy seeing you here too, Melissa 👋 🤓

My Professional Website Includes the following (with more to come): Why Study PhilosophyMy YouTube Channel (with recorded philosophy lectures)How to Argue Like a PhilosopherThe Basics (PEE: Present, Explain, & […]

I wrote an open access logic textbook, for all x, which has been adapted several times. Less well known— an introductory bit on scientific inference, covering

Between this and what’s going on in Florida (https://www.insidehighered.com/quicktakes/2022/09/26/florida-asserts-control-public-universities%E2%80%99-curricula) it's looking pretty bad for academic freedom. It would be a mistake, I think, to look […]