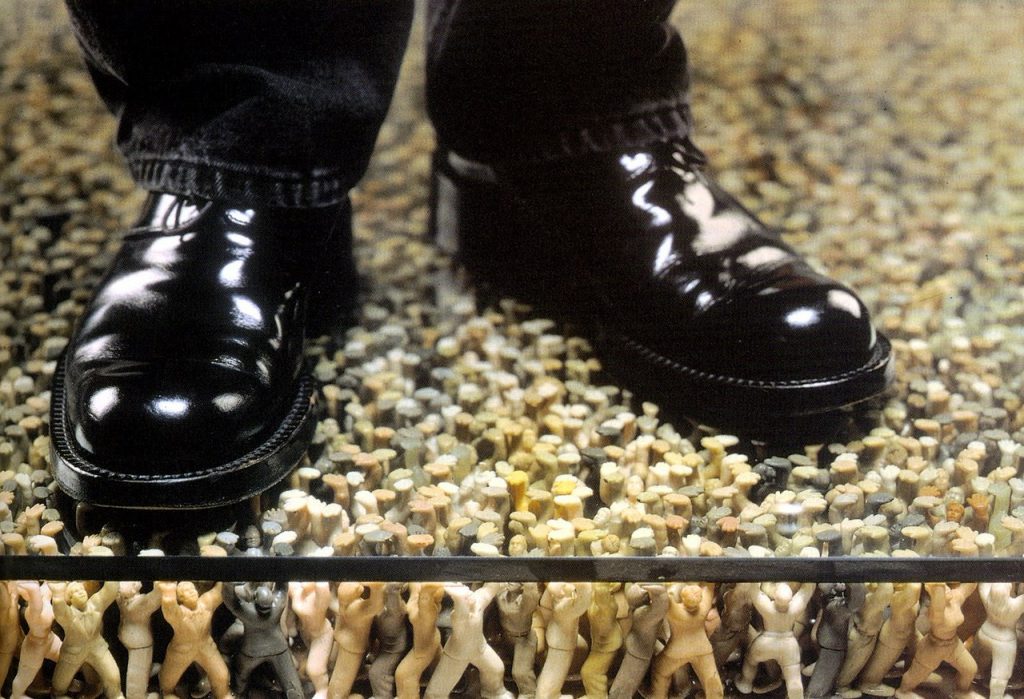 An excerpt from “Authoritarianism and Post-Truth Politics” by Jacob Levy

Donald Trump bullshits. He’s a New York real estate developer whose image involves calculated exaggerations of the stereotypes of both New Yorkers and real estate developers. Braggadocio and patter come with that territory. He’s also a thin-skinned counterpuncher who will lash out in response to criticism and slights. When he suggested that Ghazala Khan had been silent during her husband’s address to the Democratic National Convention because, as a Muslim woman, she wasn’t allowed to speak, he didn’t have any idea, and didn’t care, whether that was true. He was throwing anything he could think of at the Khans, because they had dared to criticize him. As he often does, he surrounded the inflammatory accusation with verbal shrugs and winks: I don’t know, maybe,people are saying. He often speaks like this in his rallies.

There are no winks or nudges. And I have no doubt that Trump knows this claim to be untrue. It’s not bullshit; it’s a lie, even though it comes with a spin-zone indifference to whether anyone believes it. It’s also not gaslighting. It’s too big, too obvious, and too free of any evidence. Some people will believe it, because they believe everything Trump tells them; but the people disinclined to believe him won’t believe this for a second. It doesn’t throw his opponents off-balance, or make them doubt themselves….

To understand this kind of political untruth, I think we have to look to theorists of truth and language in politics; Frankfurt’s essay was only tangentially that. But the great analysts of truth and speech under totalitarianism—George Orwell, Hannah Arendt, Vaclav Havel—can help us recognize this kind of lie for what it is. Sometimes—often—a leader with authoritarian tendencies will lie in order to make others repeat his lie both as a way to demonstrate and strengthen his power over them.

Saying something obviously untrue, and making your subordinates repeat it with a straight face in their own voice, is a particularly startling display of power over them. It’s something that was endemic to totalitarianism. Arendt analyzed the huge lies and blatant reversals of language associated with the Holocaust. Havel documented the pervasive little lies, lies that everyone knew to be lies, of late Communism. And Orwell gave us the vivid “2+2=5.”

Being made to repeat an obvious lie makes it clear that you’re powerless; it also makes you complicit. You’re morally compromised. Your ability to stand on your own moral two feet and resist or denounce is lost. Part of this is a general tool for making people part of immoral groups. One child makes a second abuse a third. The second then can’t think he’s any better than the first, the bully, and can’t inform. In a gang or the Mafia, your first kill makes you trustworthy, because you’re now dependent on the group to keep your secrets, and can’t credibly claim to be superior to them.

But in totalitarian and authoritarian politics, there seems to be something special about the lie, partly because so much of politics is about speech (and especially public speech) in the first place. Based on the evidence of his presidential campaign, I think Donald Trump understands this instinctively, and he relished the power to make his subordinates repeat his clearly outlandish lies in public. Every Sunday he provided fresh absurdities that Chris Christie, Rudy Giuliani, and Kellyanne Conway repeated on the talk shows. They didn’t persuade anyone who were strategically important to persuade; the audience for Meet the Press isn’t low-information, undecided, working-class voters, and the kinds of people who did watch those shows knew the claims were false. But making his surrogates repeat the lies compromised them; that tied them to him. And it degraded them, and made clear where power lay.

One of the many things that frightens me about the immediate future is this: the possibility that Trump now thinks everyone is his subordinate…

Trump’s more outrageous tweets eat up the news cycle and distract from hard news, like his massive conflicts of financial interest, or his massive fraud in the Trump University case. And it is important not to allow Twitter dustups to conceal real-world misconduct. But insisting on the difference between truth and lies is itself a part of the defense of freedom.

Read the whole thing at the Niskanen Center website.