Professor Balestra earned his PhD from St. Louis University in 1977, and taught at Fordham from 1979 to 2016. He acted as chair of the department from 1989-1995 and again from 1999 until his death. He was especially interested in Spinoza, Galileo, and the relationship between science and religion.

Patrick O’Donnell, a graduate student at Fordham, says “He was also extraordinarily kind and approachable, and a beloved member of the Fordham community.” There is an obituary here. 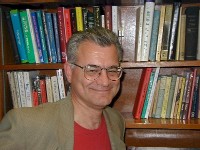 Dom was an extraordinary man–one of my heroes, and someone who taught everyone at Fordham how to live graciously, how to love philosophy, how to care for others, and how to deal with the prospect of death.

He will be dearly missed.Report

Dom’s passion for philosophy was truly remarkable. After teaching Descartes, Spinoza, Locke, etc. for almost 40 years, he still talked about them with the excitement of someone who had just discovered their ideas for the first time. He was also, as Stephen said, as gracious, kind, and welcoming as anyone you’ll ever meet.Report

Before my first semester at Fordham began, the very first department-wide email I received was the announcement of the birth of of Dom’s first grandchild. Along with pictures, his email read: “Eventually for those with children it can happen that we are fortunate enough to live to see our children’s children. May we leave them with a better world than when they were born. Please share with the department.” It let me know from the beginning that Fordham was a family and Dom helped make it that way. I am glad Dom was fortunate to spend the last five years with his grandson’s presence in the world, and I know Dom did his part leaving it a better place.Report