The other day, Jonathan Webber, a philosopher at Cardiff University, sent out a series of tweets detailing how the University of Hertfordshire, at which he was supposed to give a pair of talks, required he provide a scan of his passport in advance.

He refused, and the university cancelled his talks. 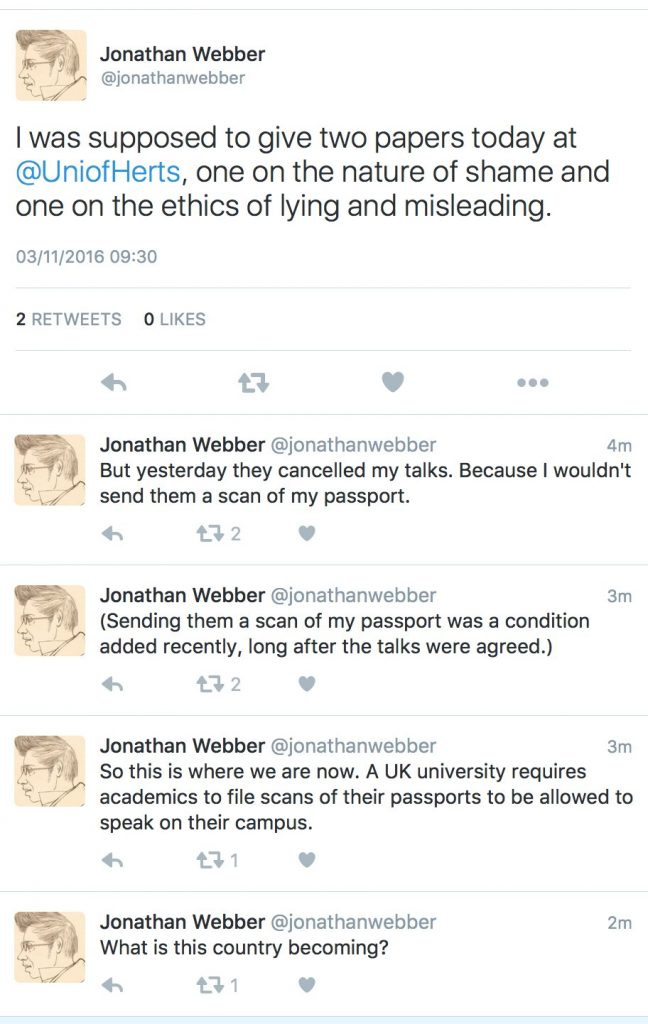 “I have given many talks all over the country and have never been asked for any documentation like this,” said Dr Webber, who is president of the British Society for Ethical Theory. The UK academic, who has held lectureships at the University of Sheffield and the University of Bristol, said that he had refused to hand over a copy of his passport on principle.

“They do not have the right to ask for my passport – they are not my employer; so why should I have to hand it over?” Dr Webber told Times Higher Education. “They were not paying me for the talk – it was just a normal academic talk that people give all the time at universities,” he added.

Asked what reason Hertfordshire had given for the cancellation of the talk, which was due to take place on 3 November, Dr Webber said that “the only information they sent me was that I had not met their current practices”. The requirement to send a scan of his passport was only added several weeks after the talk was arranged, he added.

“You are not even required to have a passport in this country,” said Dr Webber, who added that this liberty was “part of what it means to live in a free liberal democracy”.

A spokesperson for Hertfordshire described the requirement as part of “minimal internal processes.”

A twitter a commentator asks of the school: “Did they acquire borders?”

While it doesn’t seem like the hill I would want to die on, his point is nonetheless valid. The condition is irrelevant to the event and was added after the fact. I would consider it a minor nuisance but that is not Dr Webber’s experience and I am compelled to respect that.

What if the answer had been “I don’t have a passport”? Would they have cancelled the talks? As he points out, it isn’t a requirement of citizenship. If he had been coming from outside the UK I suppose there might be a justification that could be offered, but even that isn’t the case here.

Each institution has its rules and if we want to speak at an institution we have to respect its rules. But this seems pointless and petty, and Hertsfordshire should have realised its error rather than cancelling.Report

Brexit nativism on the march. It’s likely to get a lot worse. Uni bureaucrats infected by the general anti-foreigner mood. At this rate having a British passport soon won’t be enough, you’ll have to show that you are “really” British.Report

Maybe UK universities have decided to enter an international competition with US ones to see which can require the most items of tedious paperwork from visiting speakers. The US has a substantial lead, though, and will be hard to catch.Report

Is it true that the US has any sort of lead on this? I’m not sure that I’ve *ever* heard of someone being required to submit *any* paperwork for a talk for which there was no reimbursement. (There’s usually a little bit of paperwork around receipts for reimbursement, but if there’s no honorarium, I don’t think you usually get asked for tax ID or anything.)Report

I completely support this. I’d do the same.Report

I suspect the point is about money laundering: though he wasn’t being paid, presumably he would be getting his expenses. A trivial amount, no doubt, but regulations require some identification of the recipient of public money. My guess is that other documents than passports would have been acceptable. Obviously, all this should have been explained.Report

Zzzzz, who cares? Say they said he had to wear a purple shirt to give his talks, he says he doesn’t want to, then they cancel the talks. I see nothing problematic about either side’s actions. Freedom to contract, as you like.

The wrinkles might be the timing, or that certain things aren’t contractable (e.g., “send us two vials of blood or…”). But this is such a minor request and his reaction is so petulant.Report

If it was something arbitrary, like a purple shirt, that doesn’t make it any better, because we don’t want universities imposing arbitrary requirements on staff and visitors. And if it wasn’t arbitrary, we deserve to know why they required it. In the context of Brexit, as someone mentioned above, it could be an ominous sign.Report

Not sure what Hertfordshire’s status is re: taxpayer support (I imagine it gets plenty), but the freedom to hold to unreasonable policies probably diminishes when the institution is publicly funded.Report

I certainly support the university’s *legal* right to put odd conditions on visiting speakers. But surely a university is also a member of the broader academic community, and we as a community have norms encouraging relatively unconstrained giving of talks. I would be quite dismayed if a university did something like ban all visiting speakers from wearing the color of their sports rival while on campus, even though there’s probably no legal problem with such a ban.Report

Just a bit of background. The counter terrorism and security act of 2015 imposed the Prevent Duty on Universities in yhe UK. Part of this duty is to ‘have systems in place for assessing and mitigating risks around external speakers and events on campus, while maintaining the existing duty to promote freedom of speech’. I believe (and I am not really sure about this) that the act itself doesn’t really specify just how the universities are to carry out this requirement of tackling extremesism. So what has happened is that the university administrations have gone to the extremes by requiring pages and pages of paperwork and documents for every speaker so that they can show to the government that they have complied (and HEFCE is monitoring them). After all, you never know – the virtue ethicists and formal epistemologists all have a chance of corrupting the youth 🙂Report

This Act does not require passports or nationality be confirmed for speakers.Report

While any paid employee (including external examiners) are so required, Jon is not an employee and so not subject to that part of the Immigration Rules that I suspect the university is looking at. They have the law wrong. What a shambles.Report

I agree. But the admins do not seem to know what the law requires and so they seem to want to be on the safe side by trying to collect everything.Report

I don’t disagree that admins may see themselves on “the safe side”, but they are then foolish acting on a false belief about the law does (or does not) require. If they want to be “safe”, they should contact me and I’ll be happy to advise they have the law very wrong here.Report

This is not a university. What it is defies understanding.Report

Many times have I had to send a scan of my passport for honorarium purposes for talks or dissertation committee work, and to several countries. I have never had a problem with that. If that’s what they need to process the paperwork for an honorarium (meager as it usually is), I’m fine with that.Report

But there’s no honorarium in this case.Report

And it was within his own country.Report

Will
Reply to  Dale Miller

But how does the school know this without his passport?Report

Dale Miller
Reply to  Will

As I note above, such activities may constitute paid employment. This is different from Jon’s case — you are talking about something categorically different (at least in law).Report