When Chris Kramer, associate professor of philosophy at Rock Valley College in Illinois, learned that a paper of his had been accepted to the International Journal of Philosophy and Theology, he was excited. And then suspicious.

For one thing, while the paper had been sent out to two referees, there were no requested revisions of it. For another, they asked for a $200 publication fee.

Then there were the comments on the paper. Here they are in their entirety:

This study focuses on a contemporary issue. The analytical section is excellent. The paper is based on sound grammatical knowledge. The presentation of thoughts in the paper is clear. It can be published with no important modification.

And the payment instructions: 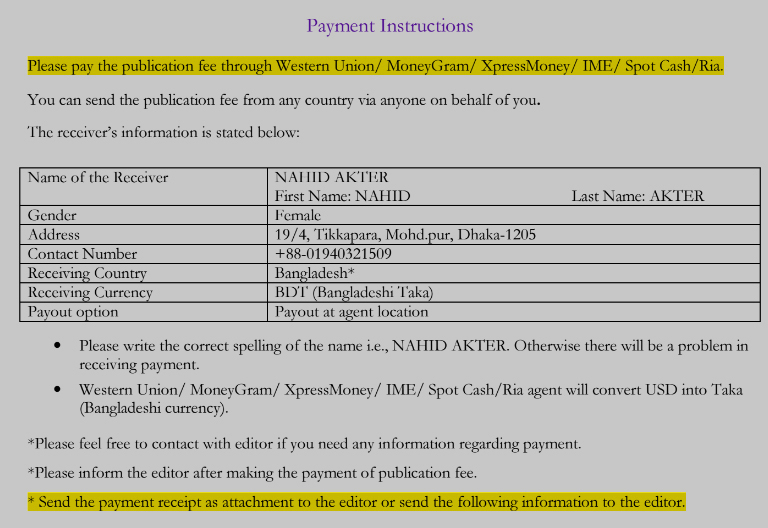 They take Western Union. You know, just like Phil Studies does.

Here’s the real one: 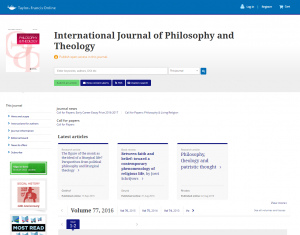 Here’s the bogus one: 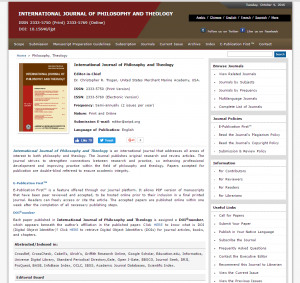 The bogus one lists an editor, Christopher Trogan (John Jay College, CUNY). He disavows any connection with them and reports that they are fraudulently using his name and background.

The editor of the legitimate IJP&T, Walter Van Herck, writes, “We are well aware of the fact that there is another fake journal using the name of IJP&T. We have contacted our publisher about this and they are investigating all possible reactions.”

Who is running the fake version of the journal? Kramer’s acceptance was on letterhead from the American Research Institute for Policy Development and authored by one Mamin Ullah. 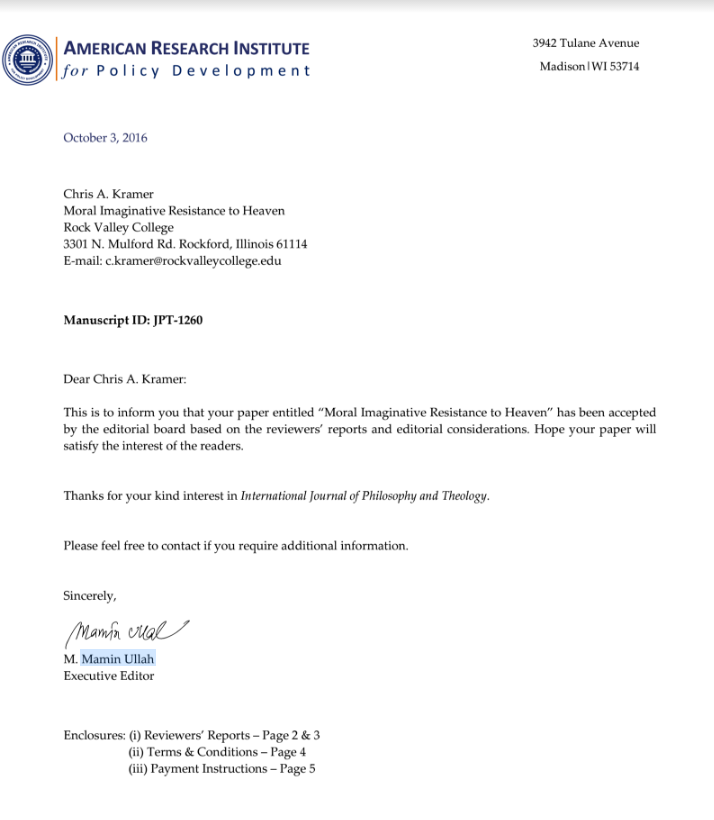 A quick look at the American Research Institute for Policy Development website suggests it is bogus—full of clip art and generic descriptions. It is unclear whether Mamin Ullah is a real person, but he or she is listed as the director of this fake research institute. Also, this is its office, according to Google Maps: 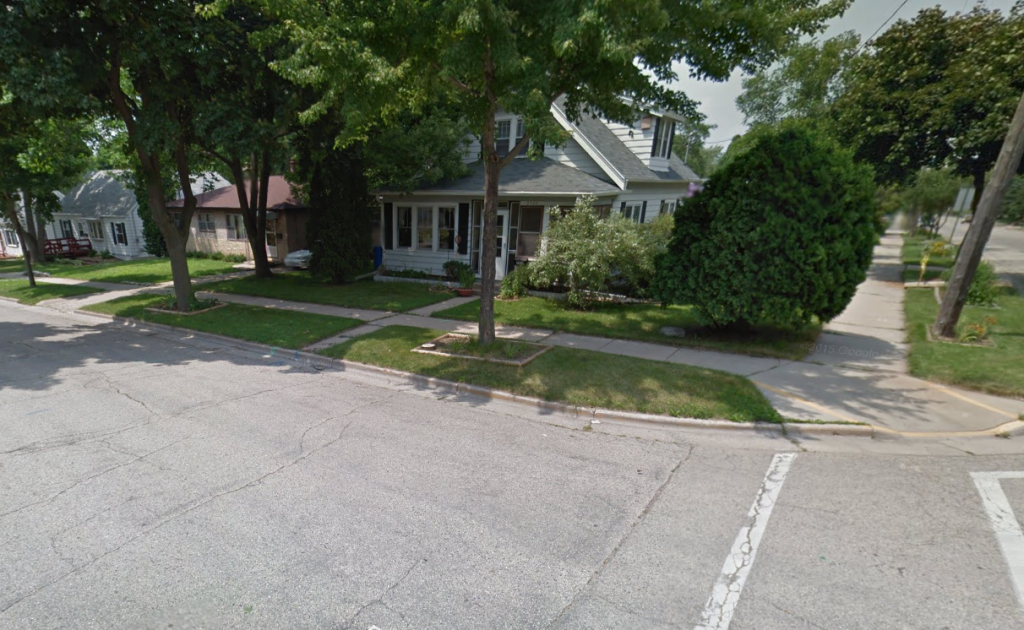 A random home in a leafy Madison neighborhood could possibly be the headquarters of a research institute, but in conjunction with the other information it doesn’t quite inspire confidence.

Both fake journal URLs use the same format—an acronym for the journal immediately followed by “net.com” so be on the lookout for that elsewhere.

Authors, be wary! Thanks to Professor Kramer for bringing this scam to our attention.

The website for the bogus philosophy journal has a link for “complete list of journals”, where they conveniently list a bunch of other bogus journals you should look out for:

How does the bogus journal know that someone has submitted a paper to the non-bogus journal?Report

It doesn’t. It works by tricking people who find their site first into submitting there, rather than through the legitimate journal’s site.Report

Oh my God, I used to get emails from this “journal”, inviting me to submit papers. I figured it was spam/fake and just ignored the emails. Suspicion confirmed! My Christopher Trogan resided at the United States Merchant Marine Academy, though, instead of John Jay College.Report

In grad school I used to get emails all the time from a “journal” called Philosophy Study. There was also another one that was something about philosophy and theology, but I don’t remember what exactly; could’ve been this one. It’s been a while since I got them. But what I remember is that they were very official looking emails that listed an ISSN and everything. But, I mean, legitimate journals don’t send emails asking grad students to submit to them!Report

See https://scholarlyoa.com/2014/01/09/questionable-oa-publisher-launches-with-a-clever-website-and-52-new-journals/ for backgrounds about the publisher of the bogus version of this journal.Report

I just received an email from the same institute under the same name of the person (Md. Mamin Ullah). I suspected since my paper was accepted without any modifications. they also requested a total of 200 USD to be paid through Western Union. They claimed that my paper will be published in the Journal of Marketing Management. I was so excited when I first saw it, but then, when I read that they request the payment to be sent to an account in Bangladesh I got more suspicious.Report

In fact, I was almost scammed. This dude M. Mamin Ullah claims to be the Executive Editor of Journal of Economics and Development Studies. I sent my article which they claimed to peer review and accepted and are asking me for $200 .
This guys are scam! I fell some months ago for the International Journal of Development Research (IJDR), lost $300. Guys beware of these journals, they are sooooooo fake. Thanks for the info.Report

Thanks guys , I almost sent money to Bangladesh.Report

I live in the house pictured above. I moved in 11 years ago. It looks different now, after a major remodel. When you look on Google Streetview now, the home has brick red siding.
I have a Master’s degree from UW-Madison. So I am familiar with academic journals and academic publishing.
The address on the ARIPD web site says it is right next door to us. There is no such address. The address doesn’t exist, so I presume all the rest of this enterprise is equally fictitious.
I have received two submissions to ARIPD journals (one in the U.S. and one in Egypt) in the last year — they were delivered to my house because we would be right next door IF 3942 Tulane Avenue actually existed. I really dislike getting in touch with people and telling them they are being scammed.Report

I was scammed by the same person M. Mamin Ullah. I paid $200 to that account in Bangladesh.

Strange thing is I just received today gallery proof of my article. Does this IJPT actually exist? It seems so. But if so, how it is still operating as a fake journal? What happens if I send gallery proof back? Would they publish it? Where? I am totally confusedReport

They are still running the scam. I was suspicious and did not open the attachment for the “call for papers” for the ARIPD journal. .Report

The vast ARIPD “empire” of journals is run by a dishonest, moneygrubbing swine in Bangladesh. The “peer reviewed” report you get is a couple of vague sentences written in broken English–and good luck if you think you can contact any journal “editors”! Many, like me, have had their names and institutional affiliations hijacked and have nothing to do with “their” journal.
If you have a paper awaiting publication in an ARIPD journal, send them an e-mail retracting the paper and then submit it somewhere else. If you have already published with ARIPD, use the DOI number they gave you to search for your paper. (Predatory journals often generate fake DOI numbers!) If you can’t find your paper, I would consider it unpublished and would see nothing wrong in submitting it to another journal. Hope this helps!Report