Philosophers have long been interested in how we make sense of the world and how thinking goes wrong. Since some of the most interesting work on these topics in recent decades has been done in social psychology on cognitive biases (even acknowledging this), philosophers should at least be acquainted with some of that research—as some already are.

There’s now a new helpful introductory resource on cognitive biases, authored by Buster Benson. He has summarized and organized a bunch of biases in a very reader-friendly article, “Cognitive Bias Cheat Sheet.”

And our solutions to these problems themselves have problems:

The article describes various cognitive biases in light of these four categories. Check it out.

Also check out the amazing visualization of this categorization that appears at the bottom of Benson’s article, created by John Manoogian III, reproduced below and available for purchase here. 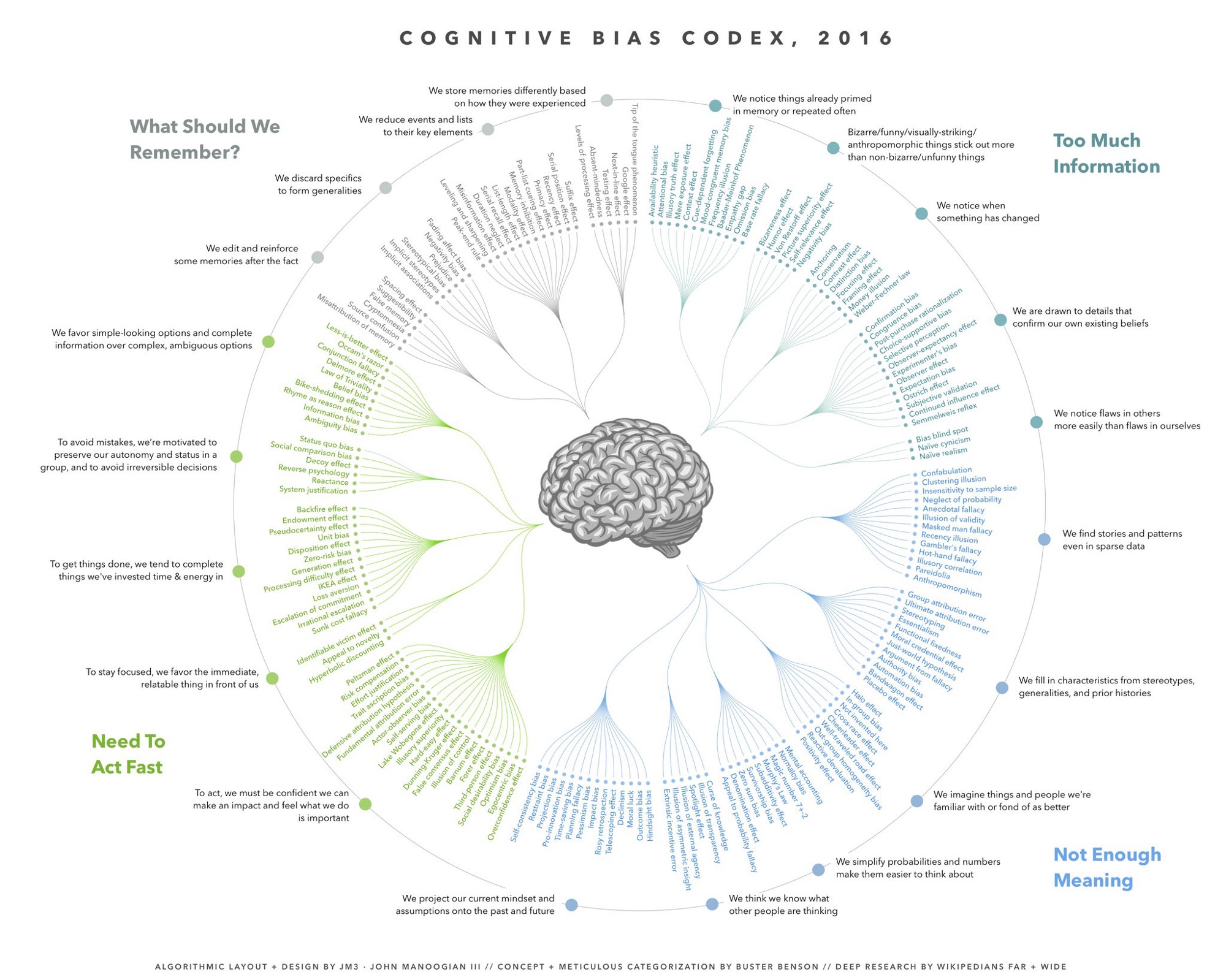 (Thanks to Kenny Easwaran for bringing this to my attention.)

UPDATE: A revised version of the Cognitive Bias Codex includes descriptions of the biases.

jeez i want to comment, but i’ve only scanned the info. it’s alot! i’d like to get a pillowcase with this info on it, then do the edgar cayce thing.
Report

Thanks very much for this invaluable guide. Every philosopher should try to be familiar with cognitive bias and the way it operates. It is especially important in political and moral philosophy where there is a tendency to engage in black and white thinking under which bias only exists in those who disagree with us.Report

Yes, great graphic of invaluable insights. IMO it is an incomplete list, and it really needs a short decriptor of each. I made a poster that contains 220+ cognitive biases, and includes a definition of each.

Could you kindly give some more information about the medical schools that requires these courses? (I am working on a syllabus and it would be

Very sad to hear about the death of this highly gifted person, I did not know her or know of her, but after reading about […]

I never denied bias JTD. That would be, itself, a paradigm example of the no bias bias. What I denied was its systematic nature as […]

The deliberations of search committees are confidential, so any rumor you hear about the internal workings of a search should be automatically suspect since it […]

Three points in response to the "I've never seen any unfair criteria be used by a search committee" bunch: Don't act like your anecdotal evidence is […]

Yes, much comes down to pure luck, and perhaps this makes some people feel uncomfortable having their (lucky) successes publicized. And this might explain why […]

Yes, that’s right. Maybe my experience is colored by the fact that a couple people also said “you earned it!”, perhaps to counteract the (at […]

The medical field requieres compulsory courses at the pre-med and med level as pertains to Philosophy and Philosophy of Science, as they enhance scientific