He says: “If (1) and (2) are right, philosophy might seem to be in a particularly sticky situation. Why? Because, there are various experiments which suggest that such intuitions are unreliable.”

But are they? He continues:

What would that mean for philosophy’s sticky situation? If it means anything, one might think, it will not involve getting philosophy off the hook so much as putting everyone else on the hook too (unless intuitions in their fields are shown to be more reliable). If intuitions are unreliable, it is little solace to philosophers that they are not alone in relying on intuitions as evidence.

But, in fact, that is not quite the picture that emerged from my research. As well as questioning (2), my research has also led me to question (1), the idea that the primary use of intuitions is as evidence. Examining the ways academics use ‘intuition’ has led me to the idea that one of the main uses to which academics put intuitions is to help explain theories rather than to provide evidence for them…

If—and it is a big ‘if’ as yet—that is right, there is now a very interesting question to ask. Is everyone off the hook? Does it matter that intuitions are unreliable? Insofar as intuitions, unreliable though they may be, are only used in explaining theories rather than as evidence, it is very tempting to think their unreliability does not matter to the same extent. 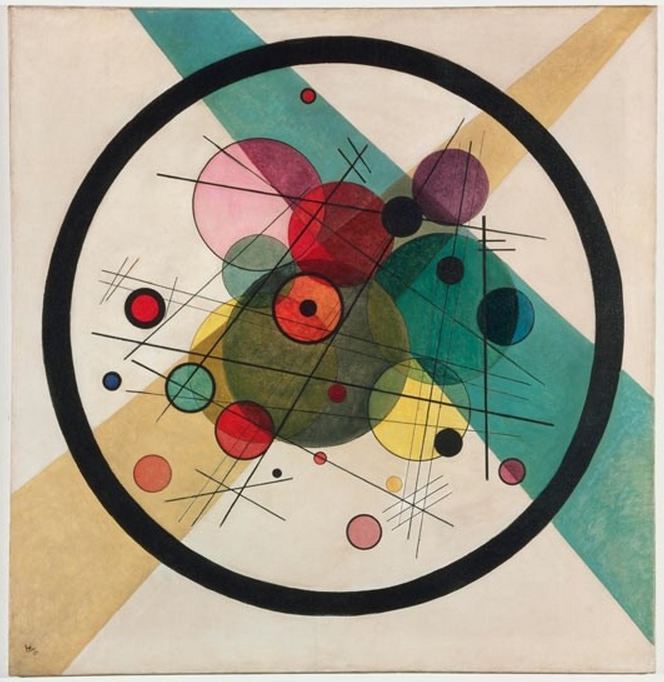 Wassily Kandinsky, “Circles in a Circle”

“As he notes, and as everyone acknowledges, philosophers use intuitions.”

As everyone acknowledges, Herman Cappelen doesn’t acknowledge the truth of the previous claim:

Andow does cite Cappelen (and Max Deutsch) as arguing that philosophers do not use intuitions as evidence.Report

Fair enough, though my point was in response to Justin’s phrasing (i.e. that ‘everyone’ acknowledges the truth of the claim in question).Report

Hi biblion — thanks for your comments!

What Cappelen denies is that philosophers use intuitions *as evidence*. Cappelen acknowledges that intuitions might play other roles in philosophy. My sense is that most ‘intuition deniers’ — to use Jennifer Nado’s term — tend to be open to that idea.

(In the post, I do say that it is ‘beyond question’ that philosophers use intuitions, but that’s me trying to be engaging in a public facing blogpost — so hopefully forgivable)Report

There’s nothing wrong with relying on intuitions per se. The problem is that philosophers rely on intuitions about thought experiments. Our moral judgments in real life are grounded in arational socio-psychological factors that cannot be adequately captured by thought experiments. Some of these factors are intrinsic to our humanity, not ‘impurities’ that need to be weeded out by armchair moral theories. Such moral theories can (as simplified models) help us understand moral reasoning, but the former cannot substitute for the latter.Report

Since “I have an intuition that P, therefore P” is not valid, there’s something at least prima facie wrong with relying on intuitions per se.Report

‘I see it’s raining, therefore it’s raining’ is not a valid inference either. That is not a reason for not relying on what we see per se, outside of special cases. I would think the same is true of intuitions. I probably should have said that instead of “There is nothing wrong …”Report

My two cents (or four)Report

Obviously I’m a bit late to the party here, but I just want to point out that it is extremely difficult to say that things like Gettier cases, or weak supplementation axioms in mereology, or that the claim that there could be things that do not actually exist, or the idea that time passes are not backed by intuitions. What else could they possibly be backed by? Is the argument that we literally perceive merely possible objects or the passage of time? Call them judgments if you like: that is a rather meaningless shift of terminology.

Cappelen’s arguments are decent, but like so many other decent arguments they fall prey to the “so what?” side of the “Is that so?”/So what?” dilemma. This is because he proceeds from the start by assuming a loaded and frankly implausible conception if intuitions as flowing from conceptual competence, rather than just defining them negatively in terms of their epistemological role (i.e., as those mental states which at least appear to give us prima face justification that are both non-inferential and non-perceptual). Under the latter, broader definition it is very difficult to deny that philosophers rely extensively upon intuitions as evidence.Report