In January, an article by Jean-Yves Beziau, “The relativity and universality of logic,” which contained some remarkably strange passages, was published in a special issue of Synthese. After some publicity, the editors of Synthese, Gila Sher, Otávio Bueno, and Wiebe van der Hoek, announced that the article had not undergone the normal review process for a special issue and declared a moratorium on such special issues. At the time, they said,

During the moratorium period we will reexamine our policies with regard to them, including quality control and other aspects of special issues… Once we complete our investigations and review process we will issue an additional statement about our findings, the decisions we made concerning special issues, and the practical steps we have taken to prevent recurrence of the present problem to the best of our ability.

Today, the editors released that statement. In it, they report that they discovered that Beziau’s article was not the only one that slipped through, and explain how this could happen:

To our great surprise and dismay we have discovered that 6% of the special-issue articles accepted for publication in Synthese in the last two years were not sent to the editors in chief for a final inspection and decision, comprising in total 13 articles. These articles were sent to production based solely on the recommendation of guest editors, in violation of our explicit instructions to send each article approved by a guest editor to the editors in chief for a final decision. This oversight occurred due to human error in handling the editorial manager system used by Springer, our publisher. An underlying reason is that the process of sending papers approved by guests editor to us (editors in chief) was manual rather than automated, leaving room for human error by employees handling a large number of submissions to diverse journals. We would like to stress that we have double-checked the twelve articles we did not know about and they all meet the established standards of Synthese.

They then lay out their plan to prevent future occurrences of this problem:

It is, however, clear that this situation is unacceptable, and we are determined to do everything within our power to prevent it from recurring. Since the editorial manager system that serves Synthese is used for all Springer journals (and by others publishers as well), it cannot be easily changed to fit the needs of an individual journal. We have studied the system’s capabilities, and in cooperation with the Springer editor who oversees Synthese, we have revised the procedure concerning Synthese articles. Although some steps in the process still require human involvement, the step of sending each special-issue article approved by the guest editors to the editors in chief is now fully automated, so that no human action is needed. In addition, we have made sure that the person who handles the Synthese editorial manager operations is fully aware of the need to be especially vigilant with respect to special issues. Still, human error in some stage of the process is always possible, and for that reason we have instituted regular checks of the systems to find out whether any special-issue article was sent to production without our approval. These checks will be conducted every three months, and we will closely follow their results and initiate further adjustments according to need.

A special issue offers an opportunity to develop, investigate in depth, and/or examine, from multiple perspectives, a special philosophical topic or the works of a particular philosopher or a philosophical movement. Special-issue papers are subject to the same standards and the same double-anonymous review procedures as all regular Synthese papers, to ensure high quality. In our experience, special issues are often of an especially high quality, as reflected in their high ranking both in terms of readership and in terms of citations. Special issues are usually initiated by members of the philosophical community, often in association with a significant conference or workshop. As such they reflect the present interests of the community and take the pulse of philosophy today, so to speak. They give young researchers an opportunity to gain experience as editors, often in cooperation with more senior members of the field. They help in obtaining sponsorship for conferences, encourage serious contributions to conferences, and lead to further development of ideas presented in professional meetings. In a sense, they give the philosophical community partial ownership of its journals. To further enhance this feature, we will open all new special issues to submission by anyone in the community.

They also address a concern that was raised in the discussion of the Beziau imbroglio:

The full statement is here. 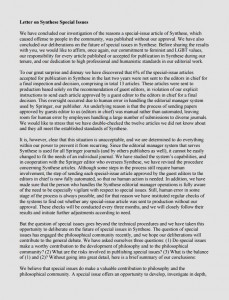 I am pleased to see that the editors of Synthese seem to have taken the issue seriously, and instituted what looks like a genuine reform. They still haven’t explicitly said that Beziau’s article ought not to have been published, although they implicate it quite heavily (the other twelve articles for which improper procedure was followed were of the appropriate quality). Hopefully the reforms implemented will do the job.Report

Kudos to Gila Sher, Otávio Bueno, and Wiebe van der Hoek, for the thoughtful and diligent work they are doing in assuring quality at Synthese, as reflected in their statement.Report