Jennings had sufficient data for 86 programs. Here are the 35 from that group that had an above average percentage of women graduates: 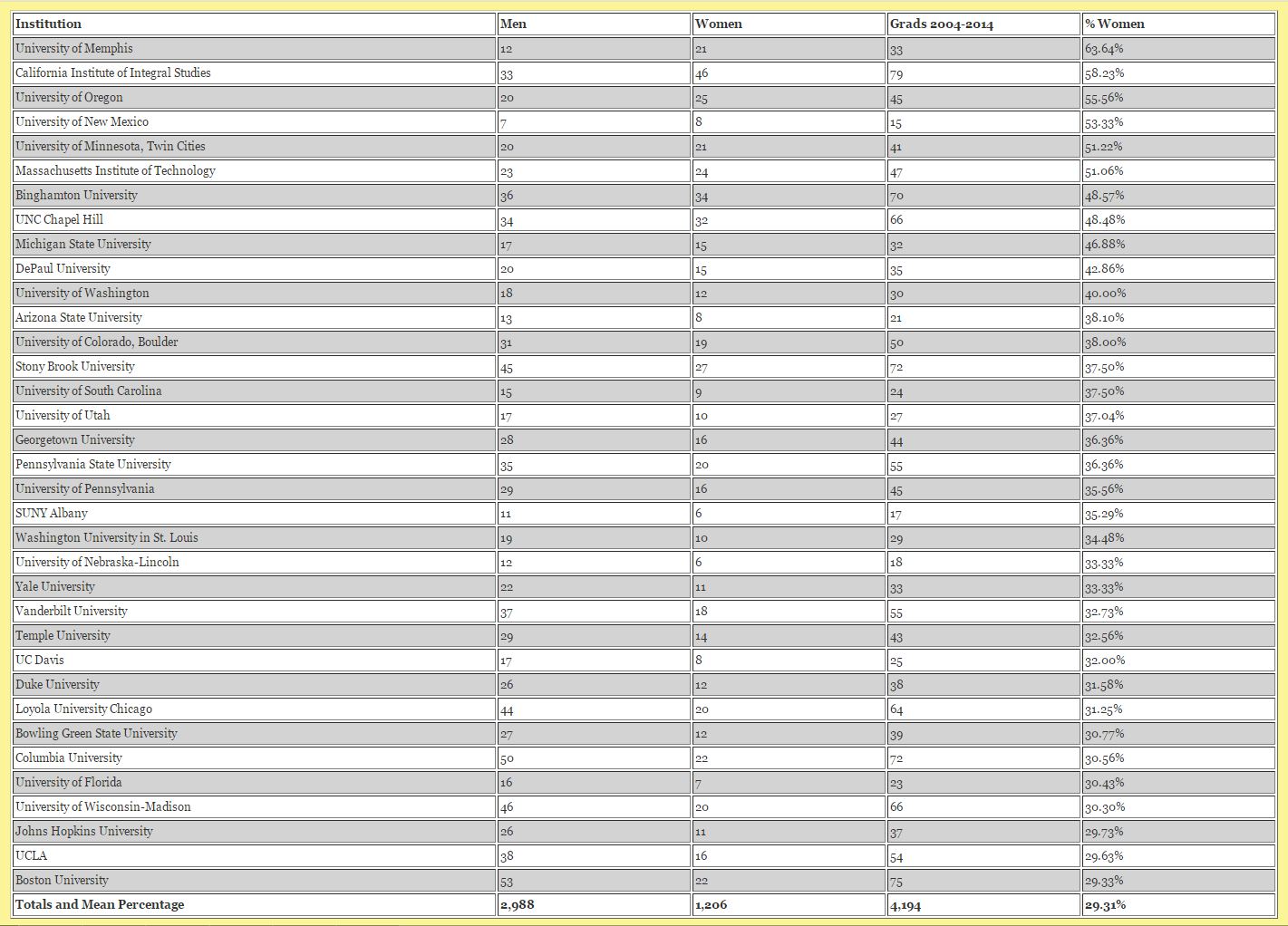 See the full post here, as well as a post about women in philosophy during the 1930-1979 period.

If you are like me, you’d never heard of the “California Institute of Integrated Studies” [number two on the list above] before. I looked it up, and I have serious doubts that it ought to be included in this list. (The university at a whole seems a bit dubious, having had some significant trouble with accreditation of some programs.) They have two grad programs with “philosophy” in their name, the program in “Philosophy, Cosmology, and Consciousness” and the program in “Asian Philosophies and Cultures”. Neither program has a single [core tenure or tenure track – I didn’t check every adjunct] faculty member with a Ph.D. in philosophy. The second looks to be primarily a cultural and religious studies program, and the first some odd mix of new-agey stuff that philosophers normally want to stay well away from. (I’m sure David Wallace would have a field day examining it!) It doesn’t seem to produce many academics who teach in anything like main-stream universities. The funding also seems pretty dubious, though we can leave that aside. I take a pretty broad view of what counts as philosophy, and am happy to have lots of different types of departments doing different things, but unless we want to take the position that anything with “philosophy” in its name counts as philosophy, it really seems like a mistake to include this place in the study.Report

Hi Matt,
The data comes from the NSF through the SED (Survey of Earned Doctorates). I think it may be worth looking into more detail how they decide what counts as being within the field of philosophy, but I don’t feel comfortable excluding a program from this list without a systematic rule of my own (which I don’t have as of yet).Report

Thanks, Carolyn. I don’t have an opinion as to whether this is important or not, but if it is worth doing, then some cases (like this one, I think) seem easy. Perhaps there are border-line cases. But, if it is important, than I’d think that some general rules like, “does a single faculty member here have a Ph.D. in Philosophy”? Or “Has a single person who graduated from this program gotten a job in a philosophy department” (I’m not certain of the answer for this one here – the information provided wasn’t very complete, but they didn’t list any such people that I could find) can do a pretty good job of ruling out the clear cases.Report

The Chair of their “Philosophy, Cosmology, and Consciousness” department is Robert McDermott, who received his PhD in Philosophy from Boston University and is former chair of the Dept. of Philosophy at Baruch College (CUNY), where he taught in the 70’s and 80’s. The Calif. Institute of Integral Studies is obviously a bit different and more interdisciplinary, so perhaps this raises a serious question about interdisciplinarity in philosophy departments. No one bats an eyelash at MIT for putting Phil and Linguistics together in the same department and even now (unfortunately, perhaps) Philosophy and Religious Studies are often put together. I doubt it is a good idea to police the boundaries of philosophy, in any case. No one is forcing anyone to get their degree there and, given the job market, I cannot honestly say that someone with a PhD from the Calif. Institute of Integral Studies is less likely to be hired than someone with a degree from many other more standard programs.Report

Thanks – I had thought that McDermott was emeritus, but I see now that I’d read a bit too quickly and that he’s “president emeritus” (of the university, I guess.) But, given that they list exactly 0 of the their students being hired by a philosophy department, the last part of the comment here is either probably wrong or else just shows how bad placement is at several departments (ones that perhaps ought not grant PhDs.) (Given that they supposedly had 79 people complete PhDs (from which department, or both, I don’t know) in 10 years, and have only a small handful listed at all on their web page, I’d not be very eager to make claims about the job prospects of their graduates!)

Also, my understanding is that Linguistics and Philosophy are only nominally one department at MIT (you certainly have to apply to either one independently, and they have separate admission requirements and processes, and separate hiring and tenure decisions, etc.) So, I’m not sure that that supports any claims here. That philosophy and religious studies are often unhappily married in (mostly undergrad) departments doesn’t seem especially relevant to me, either. Here we have, it seems, exactly one person with a PhD in philosophy in both departments with “philosophy” in their name. I don’t think that’s just “more interdisciplinary” but really more properly “not philosophy”, at least for the purposes of finding out which departments graduate the most female Ph.D. students. Again, maybe none of this matters. I don’t have an opinion about how it might effect claims about the validity of the study, for example. But it does seem misleading to suggest that this is a very successful “philosophy department” for producing female philosophy PhDs.Report

Poking around a bit more also makes it seem like a border-line scam school – very high tuition, not much support even for grad students, lots and lots of adjuncts, poorly run, according to present and past students, very low admission standards (with high costs afterwards!), dubious rigor to classes, etc. Maybe we shouldn’t care about this, and again, maybe it makes no difference to the study, but this is the sort of “border policing” for philosophy that I think we should be happy to engage in.Report

We can certainly argue about how to best demarcate philosophy and whether what PCC faculty teach transgresses your preferred border-line, but since you’ve also defamed the entire school here I must add that the majority of CIIS students are enrolled in counseling and clinical psychology programs and that those students consistently rank at or near 1st in the state in licensure exam pass rates. Many go on to serve underprivileged communities in dire need of mental healthcare. So I guess that makes two “border-lines” I’d want to dispute with you. http://www.bbs.ca.gov/pdf/exam_stats/lmft_sw_by-school.pdfReport

And by “you” I meant the commenter “Matt” above.Report

I’m curious… CIIS is “Poorly run according to the former and current students” … I am a PCC doctoral student, and found that the school runs marvelously. Dr. McDermott is the President emeritus of the school. I am not sure I know anybody from PCC (at least) who would agree with “poorly run”. Also, an OUTSTANDING support for students. PCC is an elite program founded by a Harvard graduate. I am sure everyone is entitled to his/her own opinion, but should not it be based on some personal experience?Report

My name is Olena, authocorrect;)Report

I am currently working on my dissertation from the Philosophy, Cosmology and Consciousness program at CIIS. My topic is environmental virtue ethics and I’m completely grounded in virtue theory from Aristotle, Foot, Hursthouse, McIntyre and others writing in the field of environmental virtue ethics. None of this is New Age. The classes at CIIS are academically rigorous. I wouldn’t have gone there if it wasn’t. I don’t pay any more than what I paid to go to a private university for my master’s degree. There are far less adjuncts in the PCC program than in other schools, where the national average is now 70 percent adjuncts. Most of the classes though, and this is apparently obvious by simply looking at the course schedule, are taught by the core faculty. When adjuncts are used, it is because they are recognized experts in their fields. So, for example, Jacob Needleman from San Francisco State has taught an ethics course there. Matthew Fox taught a class on Meister Eckhart. Joanna Macy teaches courses on ecology grounded in Buddhism. One of the department’s main adjuncts spent a few years as lecturer at Oxford University. I’ve been an adjunct instructor of philosophy for over ten years at the community college level. I know other students from the program also teach at both the community college and university level. Students have published papers and books with academic presses. Students present at conferences and even organize conference sessions. It is true that PCC is not like other traditional philosophy programs, but that is exactly why I chose to go there. i wanted something like what Aristotle imagined, an education that speaks to both intellect and heart. Most philosophy programs that I looked at before selecting PCC left me feeling dead inside because they tend to be all intellect with little to no heart. You’ll find that is why those who chose to go to PCC do so, you would also discover an amazing community committed to an ongoing conversation and desire to make philosophy relevant beyond the walls of an elitist community who thinks they can say what is and isn’t wisdom.Report

As a Philosophy and Religion (PCC) graduate of CIIS I feel compelled to respond to this thread. The Philosophy and Religion department/s at CIIS are some of the very few philosophy departments still engaged with the historic practice of philosophy as the love-of-Wisdom. Sophia, Wisdom, is an explicitly feminine force in the Greek sources of the tradition. How many analytic “Philosophy” departments do you see loving Her? Perhaps we (CIIS Philosophy) should publicly respond to this thread by requesting that all analytic/positivist “Philosophy” departments remove the title “Philosophy” from their departments since what they practice has no real historical grounding beyond our quite naive Madernity. (We would have to keep in humorous, of course, even if scathing — i.e. Socratic). I wonder what percentage of analytic/poistivist “Philosophy” professors are even aware that Sophia is feminine in Greek? Or that one of Socrates’ primary teachers was a woman — Diotima?Report