Elliott Green, a professor in the International Development Department at the London School of Economics, looked at which works from anthropology, economics, education, geography, linguistics, management, philosophy, political science, and psychology are cited most by social scientists. At the top of the list of the 50 most cited books, he reports, is Thomas Kuhn’s The Structure of Scientific Revolutions.

By Green’s count, there are six philosophy books in the top 50. But it is not clear whether some of the works are categorized properly.

Here are the top 25 most cited books in the social sciences, across all of the aforementioned disciplines: 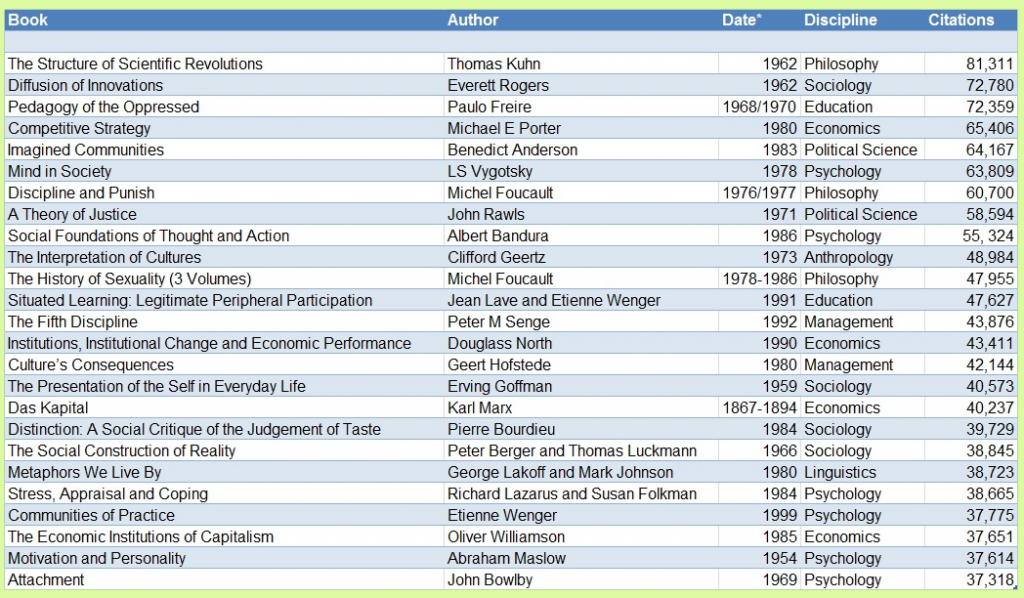 Most glaringly, John Rawls’s A Theory of Justice is listed as a work in political science, not philosophy. Some might wonder whether Marx’s Das Kapital fits better in philosophy, as well (especially given Green’s method for borderline cases—“I tended to decide based on the author’s degrees and/or professional title”—since Marx’s PhD was in philosophy). I can’t tell from Greene’s post which books are in the bottom half of the top-50, but his classification elsewhere in his post of Dewey’s Democracy and Education as falling under “education” rather than “philosophy” suggests that, given a slightly different and perhaps more plausible categorization, there are more than six works in philosophy among the top-50 most cited books in social science.

Not to mention that Kuhn’s book is a rumination on historiography of science by a physicist-turned-historian. Among the least interesting ways to read this list is to wonder about whether the authors got the category of philosophy right. More interesting would be to note that the canonical figures of “core analytic philosophy” are all missing (except maybe Rawls. if he counts) whereas Kuhn, Foucault, Dewey, Marx–not to mention Freire, Geertz, Maslow–are all there. Maybe most interesting is that the author thinks philosophy is a social science and not a humanities discipline (which is how we got in there in the first place).Report

Agreed that those are all interesting points, Alan.Report

Why would canonical figures be listed? Do the social sciences read Frege or Russell?Report

When I was a graduate student at Pitt in the 80s, Kuhn was treated as a core figure of analytic philosophy of science. But why would you expect Kripke or Lewis to appear on this list of works cited by social scientists? Kant, Hegel and Nietzsche aren’t there either.Report

Ironically, modern day economics departments teach zero about Karl Marx’s works, and I suspect many of the Das Kapital citations (at least the more recent ones) pertain to political science, philosophy, and sociology research.Report

Thanks for these comments. Obviously deciding the correct disciplines for some of these books is very difficult. Michael Porter’s work could be classified as either management or economics; Marx’s Kapital could be economics, philosophy or even sociology; Foucault’s works could be philosophy or sociology. I classified Kapital as economics simply because of its subject matter. I fully admit that Rawls could definitely be classified as a philosopher and probably should on second thought; I listed him here as a political scientist (political theorist) both due to his prominence in political theory and due to being a faculty member at the LSE, where Rawls is probably read more in the Government department than in the Philosophy department.Report

Not a single women on the list!Report

Interesting that he includes Philosophy among the social sciences. (He explicitly says he is excluding the humanities.)Report

I think you misunderstand. These are books that are cited by social sciences (of which philosophy is not included), but they are classed according to the author’s discipline.Report

I think Michael is correct here; the author writes “I included the following disciplines in my list: Anthropology, Economics, Education, Geography, Linguistics, Management, Philosophy, Political Science and Psychology. I thus excluded publications from both the humanities and the natural sciences.” So he’s looking for the most cited books/articles from those disciplines, not by them.Report