The vast majority of philosophy departments in the United States offer courses only on philosophy derived from Europe and the English-speaking world. For example, of the 118 doctoral programs in philosophy in the United States and Canada, only 10 percent have a specialist in Chinese philosophy as part of their regular faculty. Most philosophy departments also offer no courses on Africana, Indian, Islamic, Jewish, Latin American, Native American or other non-European traditions. Indeed, of the top 50 philosophy doctoral programs in the English-speaking world, only 15 percent have any regular faculty members who teach any non-Western philosophy.

Given the importance of non-European traditions in both the history of world philosophy and in the contemporary world, and given the increasing numbers of students in our colleges and universities from non-European backgrounds, this is astonishing. No other humanities discipline demonstrates this systematic neglect of most of the civilizations in its domain. The present situation is hard to justify morally, politically, epistemically or as good educational and research training practice…

Instead, we ask those who sincerely believe that it does make sense to organize our discipline entirely around European and American figures and texts to pursue this agenda with honesty and openness. We therefore suggest that any department that regularly offers courses only on Western philosophy should rename itself “Department of European and American Philosophy.” This simple change would make the domain and mission of these departments clear, and would signal their true intellectual commitments to students and colleagues.

That’s Jay Garfield (Yale-NUS) and Bryan Van Norden (Vassar) in “If Philosophy Won’t Diversify, Let’s Call It What It Really Is” (New York Times). They add, “Of course, we believe that renaming departments would not be nearly as valuable as actually broadening the philosophical curriculum and retaining the name ‘philosophy.'”

Meanwhile, the latest issue of the American Philosophical Association Newsletter on Asian and Asian-American Philosophers and Philosophies is focused on the status of Asian philosophy in the discipline in the United States.

Amy Olberding (Oklahoma), guest editor of the issue, presents some data on how often work that engages substantially with Asian philosophy appears in a number of “mainstream” journals. The numbers are astonishingly small: 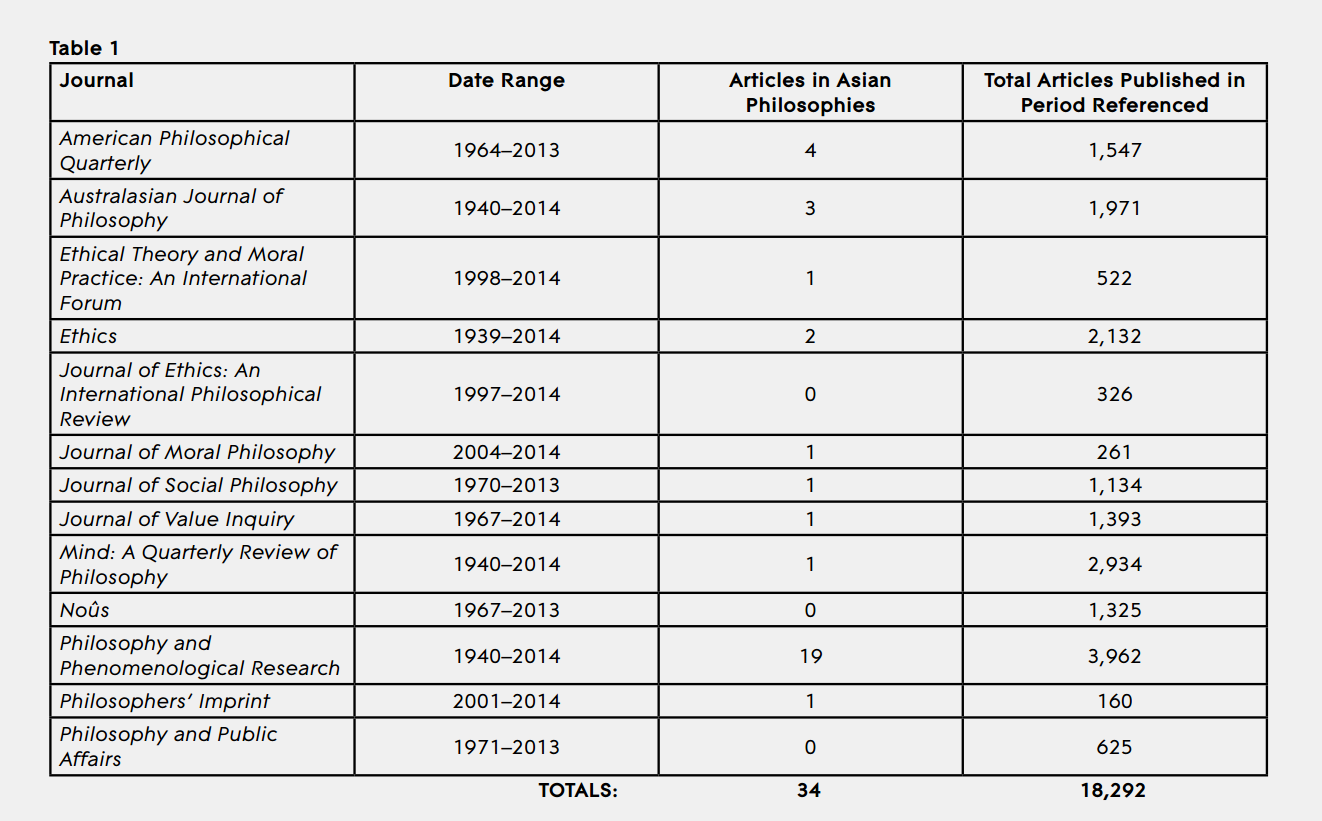 She notes that while the number of total articles on or engaging with Asian philosophical traditions has increased over the past 70 or so years, that is owed to the establishment of specialist journals. There has been virtually no increase in the number of articles in that category published in general journals, as is apparent from Table 2, which compares that number with the number of such articles in Philosopher’s Index (PI):

One downside of this is that if specialist journals are where nearly all such work is published, these “conversations risk becoming wholly private, uncoupled from wider philosophical discourses.”

Olberding countenances various reasons for these numbers. One is that “most of these journals receive submissions in Asian philosophy comparably rarely,” according to their editors. Yet this is likely the product of a self-reinforcing process, as she explains:

Low submission rates are, however, in many respects unsurprising given that the percentage of philosophers both trained in Asian philosophy and likely to produce general audience research is small. But here, too, it would be hasty to think that this is the only or principal problem. After all, work in Asian philosophy has dramatically increased in recent decades and yet there is no corresponding sign of this in the general journals. Insofar as these journals are not seeing an increase in submission rates of work in Asian philosophy, this may owe to the journals’ track records. That is, these journals’ historically low publication rates for work in Asian philosophy will have considerable influence on the likelihood of their receiving submissions in the area. Most basically, philosophers of all stripes will incline toward submitting their work in the journals they most frequently use in performing their research. Since the general audience journals rarely publish in Asian philosophy, specialists are simply unlikely to identify their work as viable for these outlets. More potently, few philosophers will submit their work to journals that rarely or never publish “work like mine” or, indeed, are perceived to exhibit a bias against “work like mine.” There is, in other words, a vicious cycle we cannot discount: the absence of Asian philosophy from a journal’s prior issues will depress submissions going forward, producing yet more issues in which the work is absent.

Importantly, she highlights the professional consequences of these publication facts:

We inhabit a world in which myriad professional goods—goods ranging from winning jobs to achieving tenure and promotion, as well as other markers of status, such as acquiring research funding or winning awards—are significantly influenced by one’s success in securing publications in the best outlets possible. Insofar as the profession counts publishing in the most “prominent” or “top” general journals as one of the most direct pathways to “prominent” or “top” status for individual philosophers,13 we should not expect anyone working significantly with Asian philosophical sources to succeed in this way.