I think that rights-based discourse is necessary, but there is this sense in which rights can be given and, by implication, taken away. Within this context, I think that America needs a movement that transcends the civil rights movement. Applicative justice might be necessary, but not sufficient. Imagine a scenario where justice is being applied across the board, and the rights of people are being upheld. In a country like ours, saturated by racism, that scenario might still involve blacks being hated, seen as “inferior,” as sub-“persons.” In such a world, white people can continue to insulate themselves from the “others.”

We are desperately in need of a movement that shakes us at the very core of how we think about ourselves as individuals, masters of our own destiny. While this isn’t philosophically fashionable, I want to know what it means to love with courage. What would it mean to make love an integral feature of moral reasoning, the kind of love that risks profound ways of being mutually vulnerable, of placing no limits on who we call our neighbors? This means radically changing how we currently relate to one another.

That is George Yancy (Emory), interviewed by Brad Evans (Bristol) in the New York Times philosophy column, The Stone. In the above passage he is stepping away from the focus on institutions to look at the role of individuals in changing a racially unjust society (not unlike some of G. A. Cohen’s later work on distributive justice).

Readers may recall that at the end of last year, Yancy had published a piece at The Stone that brought him a lot of hate mail (previously). For example:

Professor Yancy,
All your studies have forced me to examine my self image and my white racist mind. You clearly state that no matter what I think, I’m a racist. OK, cool..thank you for clearing that up. Now I am forced to say, because you tell me I can say nothing else, FUCK YOU NIGGER!
as always,
the white guy

In the interview, Yancy discusses the effects of attacks like these:

Only now have I really begun to recognize how discourse designed to hurt can actually leave its mark. I recall after reading so many of these messages I began to feel sick, literally. So, words can debilitate, violate, injure; they can hit with the force of a stick or a stone and leave marks on the body. In this case, I began to feel the posture of my body folding inward, as it were, under the attacks.

The attacks, Yancy says, illustrate the resistance a racist society has to the idea of a black intellectual:

There were some very nasty remarks that were designed to question my status as a philosopher because I’m black. The implication of those messages was that to be black and a philosopher was a contradiction, because “niggers” can’t be philosophers. 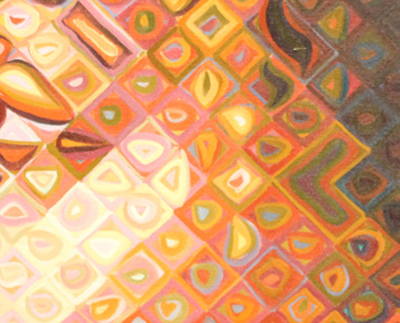 (detail of portrait of Kara Walker by Chuck Close)

Thanks for this link. All philosophers should decry these nasty and racist attacks on Prof. Yancy.

Grad on The Development of Experimental Philosophy

I was taken aback by the inclusion of Railton's paper. It's a lovely paper, and it certainly *discusses* experimental philosophy, but I wouldn't call it