Amy Donahue, assistant professor of philosophy at Kennesaw State University in Georgia, was arrested at the Georgia Capitol this past Friday as she tried to display a sign opposing legislation that would permit concealed weapons on college campuses. According to the Savannah Morning News:

State Troopers handcuffed and arrested Kennesaw State University philosophy professor Amy Donahue for disruption of the General Assembly and obstruction of an officer. She was holding a 22-by-28-inch sign opposing legislation that the Senate later passed 37-17 that would allow students 21 years old and older to have a concealed weapon on college campuses.

Though there is a state law allowing Capitol security to ban signs from the building, there is concern that it was the content of Donahue’s sign that led to her arrest:

A woman accompanying Donahue said legislative officials told them holding a sign would be permissible on the Capitol floor that legislators use, but a statement from the Georgia State Patrol quoted a state law authorizing security officers “to deny entrance into or upon any such property or building of any person displaying any sign, banner, placard, poster, or similar device.” Donahue had already been allowed entrance to the building with her poster and had even ventured to the fourth floor before her arrest on the busy third floor. Groups regularly bring signs into the Capitol, and because the State Patrol did not argue hers was somehow a greater risk to safety, officers apparently arrested her because of what was written on her sign.

Donahue was charged with two misdemeanors and released on a $2000 bond. Details here. 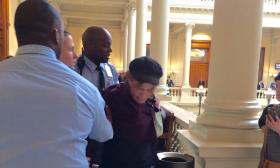 Clearly there is a recognition of the second amendment in Georgia, but cetainly not the first amendment. This exhibits a complete and fundamental misunderstanding of the Constitution of the United States of America. An originalist interpretation would suggest the founders would be greatly troubled by this adamant ignorance.Report

A law allowing concealed weapons on campus?! What on earth is going on?Report

The beginning of the endReport

Worried about being arrested for carrying a sign, but still allowed to carry concealed weapons? No problem. Simply swap out the flag of this fake starter pistol for your message of protest, and shoot away! : http://www.amazon.com/gp/product/B0023XVOYS/ref=pd_lpo_sbs_dp_ss_1?pf_rd_p=1944687542&pf_rd_s=lpo-top-stripe-1&pf_rd_t=201&pf_rd_i=B0006GJXW4&pf_rd_m=ATVPDKIKX0DER&pf_rd_r=0HMCP6E6K6CW39VFSWTZReport

I don’t have a nugget of erudition in response. This is just terrible.Report

Kennesaw, GA, actually requires by law that every household own a gun. It also has one of the lowest crime rates in the country, including adjustment for population, and which crime rate purportedly saw a significant decrease after the law was passed.

It is to be noted that the story contains no account of the incident other than that given by Donahue’s fellow protester.

Personally, I oppose the measures for concealed carry on campus, not because I find guns inherently dangerous, but I think there are too many yahoos out there liable to earn a CCL and start shooting wildly, perhaps even with good intentions. In a culture where guns were more respected and better understood, I would find such legislation less threatening.Report

The law is that you have to own a gun unless you don’t want to: http://www.snopes.com/kennesaw-gun-law/Report

For those of you might be interested in helping, I’ve started a fundraising page to help Amy Donahue with the legal fees she is facing following her arrest.