There will be a funeral Monday at 12:30 p.m. at Levine Chapel, 470 Harvard Street, Brookline, Massachusetts. Burial will be immediately after at the Crawford St. Cemetery at 776 Baker Street, West Roxbury.

His wife, Ruth Anna Putnam, writes in an email, “If you would like to make a gift in Hilary’s memory, please donate to Southern Poverty Law Center, 400 Washington Avenue, Montgomery, Alabama 36104.”

I will update this post with further information and memorial notices as they become available. 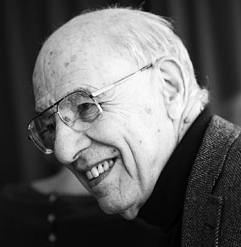 (correction: the title of this post initially incorrectly stated Putnam’s birth year as 1929. It is 1926.)

UPDATE: Below are links to related online material. If you have relevant links please mention them in the comments or email them to me. Thank you.

Below is a photo of Putnam participating by video in a conference last October, “The Philosophy of Hilary Putnam” at IIT Bombay, courtesy of Sanjit Chakraborty. 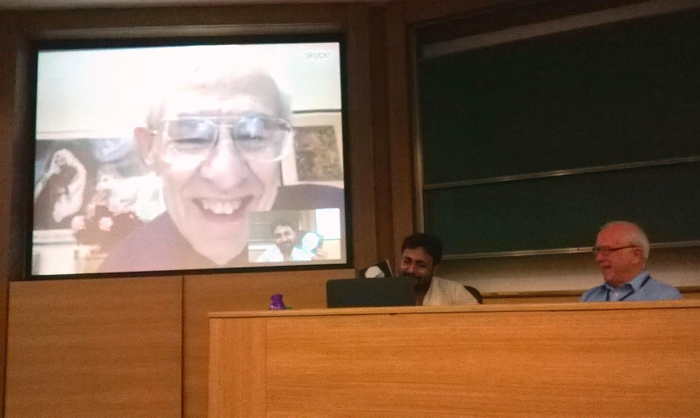 One of a kind. A sad lossReport

A great philosopher. He not only knew the contemporary work in his major areas, but the history of Western philosophy. So his contributions were not only technically creative, but philosophically deep. Famously, he was not afraid to change his mind. That’s what the people who keep learning do. And amazing for anyone of his stature, he was a deeply, genuinely good human being. To paraphrase: a circular mensch. That is, a mensch from every perspective. The end of an era.Report

So sad to hear this!Report

Three cheers for the creator of Twin Earth.Report

Professor Putnam lived to see the publication of his Library of Living Philosophers volume, but sadly not the reviews which, having skimmed it, I expect to be ecstatic. It shows a philosopher who managed to maintain his joie de philosophie (not to mention is massive talent) right up to the last. His intellectual autobiography is a model of its kind, his replies to criticisms generous but acute. And I personally am pleased to see that he has largely given up ‘internal realism’ and reverted to the scientific realism of his earlier years. For young philosophers, not raised on Putnam, who want to know what all the fuss was about I strongly recommend it.Report

I am deeply saddened by this news. He was probably the last of the great Analytical Philosophers and we were still learning from him. He visited India and has had many students and intellectual followers in the country here. In most of the Departments his work is taught.
Our deepest condolence to Professor Putnam’s family and colleagues.
Please can you send me Professor Putnam’s residential address. We shall hold a condolence meeting here at our university and would like to send our message to Professor Ruth Anna Putnam.
Madhucchanda Sen
Jadavpur University
Kolkata India
[email protected]Report

I am very sad.professor putnam was one of the most important philosophers in our age.god bless himReport

RIP Hilary Putnam; The great philosopher of our times. Really a great loss to philosophy.Report

The analytics have lost a hero. RIPReport

I’m sad to read of his passing. Anyone interested in his thoughts on “nonscientific” knowledge which Nussbaum mentioned could listen to a good lecture of his on that topic from his 1998 lectures at the University of Adelaide (also I think in his 2007 collected papers):

Also in honor of his thinking on meaning and reference discussed in that 2001 interview with Julian Baggini there is an interesting essay written by Ian Hacking titled “Putnam’s Theory of Natural Kinds and Their Names is not the same as Kripke’s”:

Thanks for posting the link to Putnam’s “A Half Century of Philosophy,” which I hadn’t come across. As someone who knew the currents of “analytic philosophy” and its history so well, I found this last paragraph on the use of the term quite moving:

My Gurudev Hilary Putnam: A Memoriam
I call Hilary Putnam, my Gurudev, i.e. a mentor whom his disciple can consider as God.
In the last eight years, we have more than 1000 lovely academic and personal email correspondences. We were never physically near, but we are mentally very close to each other and therefore he always remained as the biggest part of my life. Really, He is the man who proved the world that a wonderful relation not only depends on kinship, personal meeting, teaching etc, but on universal love and mental satisfaction that a good soul can exchange with anyone. He is my constant source of thoughts, works and life and always taught me how to live and how to love more and more to yourself and others!

My mentor did a lot for humanities, science, and society. He is now going to take some eternal rest in peace! He achieved peace in his mundane life, and it will remain continuing even after his life.
A person full of wisdom, loves and morality with always a smiling face and beautiful eyes told in his last few communications to me that ‘I feel grateful that I had so many good years’.
I, who is extremely fortunate for being showered by his gracious blessings and loves not only to me but also to my nearest, pray from my heart that Hilary Putnam, my beloved Gurudev will always remain in the core of our hearts, whom he always loved.
Affectionately,
Sanjit ChakrabortyReport

I recently came across an interview with Alvin Plantinga and Hilary Putnam on God, religion, etc.. Some interesting stuff from both philosophers, and some listeners even call in and ask them questions. Anyway, I thought that the readers here might be interested in this. The link is here, should anyone care: http://reformedaudio.org/audio/plantinga/The_God_Problem_Hilary_Putnam_and_Alvin_Plantiaga_discuss_Gods_existence.mp3Report