Jülide Yazıcı, a student in the Philosophy Department in Boğaziçi University who was active on social media supporting academics threatened by the Turkish government, was arrested two days ago. According to one source, she was charged with “being a member of an armed terrorist organisation” and “spreading terrorist propaganda.” The specifics of the accusations are unknown to her because the details of “terror cases” are kept secret. She is currently in jail and is expected to be so until her trial.  [correction] Two other students and one recent graduate from the university were also arrested.

A petition calling for her release is here (in Turkish and English). Please consider signing. 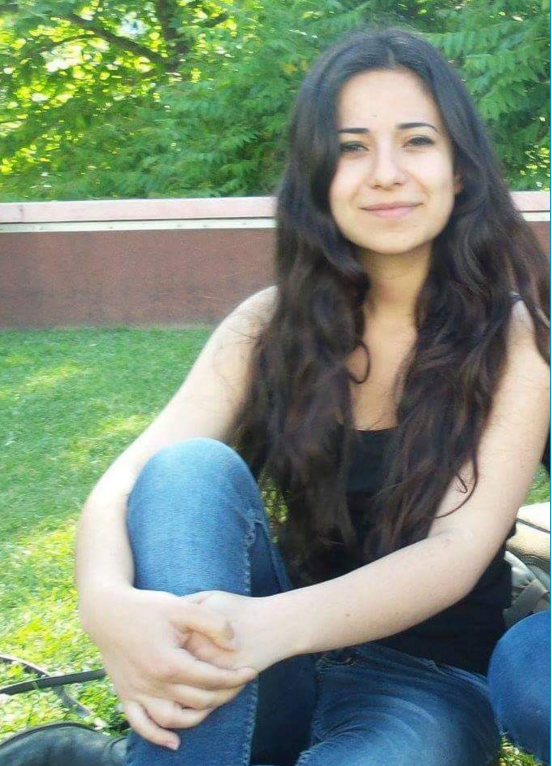 From the petition: “Jülide is our friend who opposes injustices, defends peace, workers, and women. She is our friend who struggles with us shoulder to shoulder. We demand an end to this unjust imprisonment and ask everyone for solidarity. We are going to be following the case until our friend joins us again and wins her freedom.”

UPDATE (2/2/16): The petition has over 6100 signatories. Please continue to share this post so that more sign. At the moment, sources in Turkey say that it looks like the government will be keeping Jülide and other students in jail for 3 to 6 months, prior to their trials. I will update the post as further information comes in. 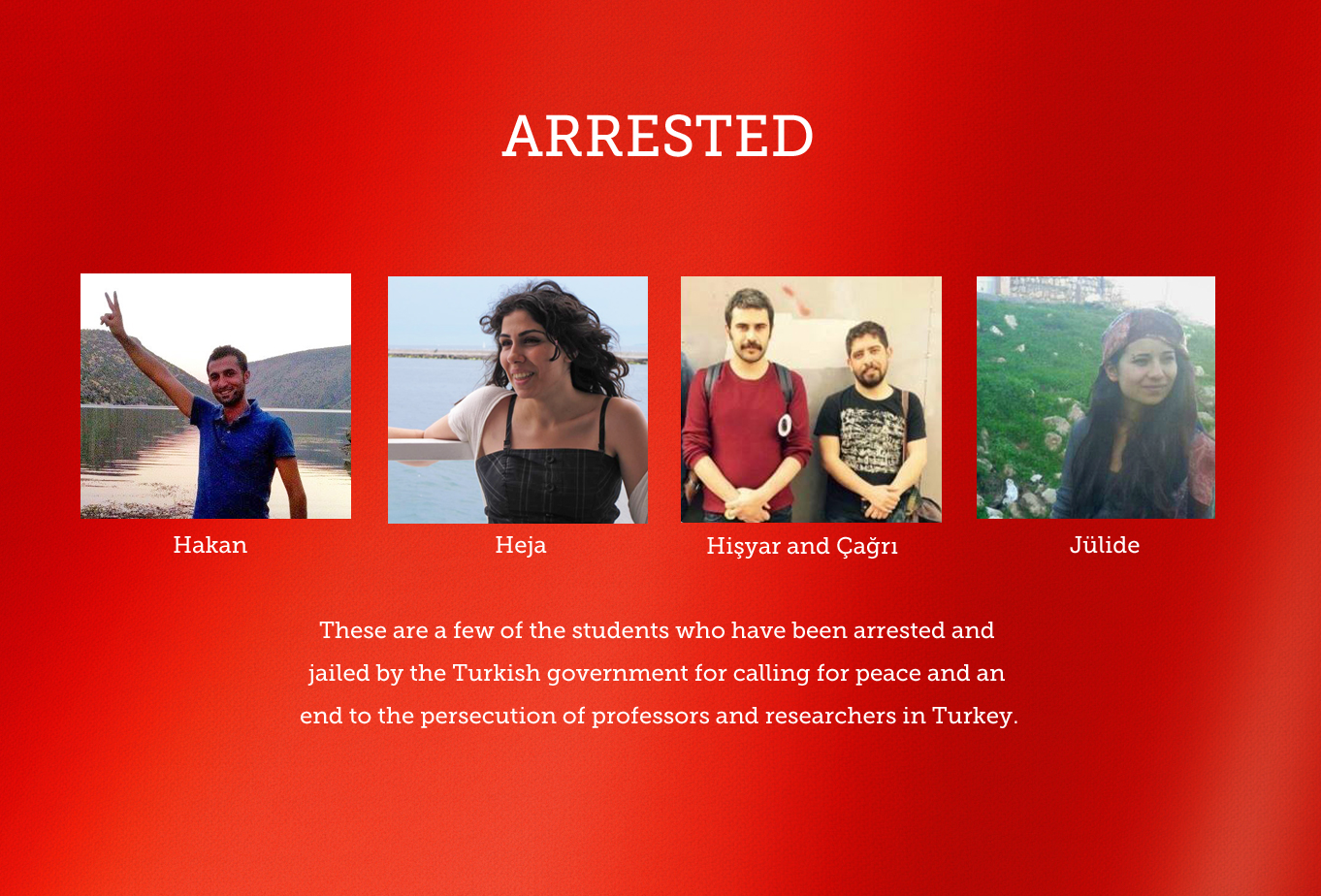 UPDATE (2/5/16): The following is Jülide’s address in the woman’s prison in Istanbul. This was passed on to me from a contact in Turkey who thought it would be for her to receive some letters or postcards to help lift her spirits while she awaits trial:

From the petition: “Jülide is our friend who opposes injustices, defends peace, workers, and women. She is our friend who struggles with us shoulder to shoulder. We demand an end to this unjust imprisonment and ask everyone for solidarity. We are going to be following the case until our friend joins us again and wins her freedom.Report

Aside from being unjust, this arrest will push Turkey towards being an international pariah.Report

Stop Turkish oppression of those who speak up for justice.Report

Freedom for the people who speak up for justice …..Report

This seems to me to be an issue of freedom of expression which is now being denied in Turkey. How dictatorial does the country want to become if it wishes to suppress freedom to express opinion and have critical discussion – a fundamental human right.Report

This is a stupid regime that balks at justice like a vampire does the light of day. Free her!Report

In a fair and democratic society, the suppression of free speech is absolutely incompatible. In particular, the suppression of free speech on university campuses is absolutely antithetical to the purpose of having such institutions, whose job it is to challenge the status quo and pose challenges to the establishment. As a Turkish-American, ex-Bogazici student, and free-speech devotee, I support Yazici and all other academics imprisoned for their statements and thoughts.Report

Freedom of speech is one of the most important things to the devolopment of society. People who speak for justice are heroes an should not be put in jailReport

Sadly neither Turkey nor Israel is a democracyReport

‘Why should we not express our thoughts freely?’ this must not be a question anymore, I wish. I am a human natural born to think, speak, investigate… Freedom for and solidarity with Julide Yazici.Report

Unfortunately, democracies can be really ruthless with individuals who express unpopular views. Turkey, isn’t the only example of this, look at Israel. The majority often just doesn’t want to be woken up to what’s happening in its midst, and will shoot the messenger. Calling countries that act this way dictatorships- as if it’s the government, and not the majority that is intolerant, unfortunately misses the point.Report

Free Julie Yazici; freedom of speech is a pillar of democracy. Without it we cannot claim to be a democracy.Report

Democracy can only be existed if individual rights are protected and can express their view otherwise there is not democracy….. if Turkizsh government wants to be classed as a democracy they must free Julie YaziciReport

Freedom for those who speak up for justice.Report

And this authoritarian country wants to become a member of the European Union… Yeah right.Report

I find these comments to the story rather interesting. The story says that the particulars of her accusations are not known, yet those who call for the accused individuals freedom, and even praise them for their “heroism,” voice their opinions as though they (a priori) know precisely what’s going on. How sheep-like, and how un-philosophically-minded.
I wonder, do these same commenters raise this sort of protest against the accusers of those who speak in a non-politically correct tone?Report

A philosopher from Turkey

I know the student. She is not a terrorist. She is being prosecuted, along with many other friends of mine, for being openly critical of the government and advocating peace with the Kurds.
It is not the fat that the accusations are “not known” but that they are in a secret file that is kept from the defense.
This is a Kafkaesque situation, and Baristotle should be ashamed of him or herself for using the fact that the prosecution file, including the exact nature of the accusation, is kept secret from the defense to support the state narrative. Julide does not even know which terrorist organisation she is supposed to be a member of.Report

HighFiveGhost
Reply to  A philosopher from Turkey

Baristotle
Reply to  A philosopher from Turkey

You should have read Baristotle’s comment twice — perhaps even three times — so you could understand it better before commenting on it.Report

An international campaign is needed for these comrades. To secure their release by exposing the increasing dictatorial regime of Erdogan and the rapid elimination of human rights under the guise of the “fight against Terrorism”.Report

I hope she would be released. Otherwise, Turkish goverment would demonstrate once more its unhumanistic face.Report

This is so sad. A Turkish Ph.D. student had applied for a grant to com work with me for a year. Before the coup and academic crackdown he was expecting any day to hear if he was successful; when the ban on academic travel was announced he wrote to say that it wasn’t going to happen, at least not soon. I’ve refrained from signing the petition just because I worry that this might make it more difficult for him to come even if the ban is lifted.Report