451 PhDs in philosophy were awarded in the United States in 2014, marking a modest decrease from the 494 of the previous year. Here are the numbers for the period from 2004-2014: 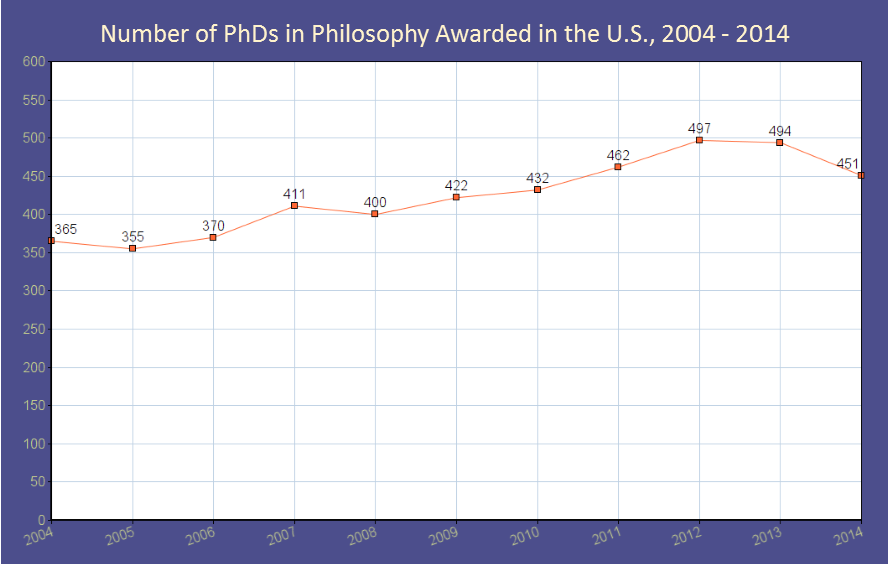 These numbers are from the U.S. federal government’s Survey of Earned Doctorates. (Thanks to Robert Townsend, Director of the Washington Office of the American Academy of Arts & Sciences, for bringing them to my attention.)

And there are how many TT jobs this year?Report

People who finished their PhD in the peak year of 2012 will have enrolled in the PhD when? in 2006? or 2005? As I recall, the job market wasn’t bad then and the number of PhDs being graduated was, at least compared to now, low. It shows how difficult it can be to make decisions about graduate study by looking at market conditions at the time of enrollment.Report

You also have to look at the aggregate study population. Even if it looks like the trends are good (fewer PhDs, more TT jobs every year for a multi-year period), the chances of getting a TT job are still steadily declining because the surplus of PhDs from years past has been increasing, even if it’s increasing at a smaller rate.Report

Grad Sockpuppet:
Look at http://www.newappsblog.com/2015/10/tracking-the-job-market-a-start.html#more
The numbers have ranged from 245 to 296 over the last three years. The figure for this year up to 10/1 is 109, which is a sharp decline and would seem to predict a total around 200, but we shall have to see.Report

Michael, those numbers are wrong, at least if you’re suggesting those are the TT numbers. Are you perhaps looking at the numbers of TT jobs *plus* post-docs? The graph in your link shows that the highest number of TT jobs in a recent single year was 163 jobs (that was 2013). So far this year, at least as of the updating of that graph, there are 109 TT positions. In no year listed did the numbers of TT jobs get to the 200s.Report

Philjobs currently has 72 TT jobs for this year. I’ve found a few advertised only elsewhere, but not many.

PhilJobs does have 148 total jobs, however, and I’ve found several non-TT jobs not advertised there. But, as anon points out, that number also includes some adjunct positions, postdocs, and VAPs. Seems a bit late for 50-100 TT jobs to materialize, though. They’ve trickled in really slowly for weeks now.Report

Mydepartmentisoneofthem on Gender in Philosophy Hiring

Not sure if this was controlled for, but a persisting lower proportion of women in the profession and an advantage in hiring would be consistent […]

Sorry, I'm not trying to be sarcastic here. It takes some time and effort to become adept with large language models, and to acquire finesse […]

JTD on Gender in Philosophy Hiring

Like most people, I welcome the outcome of more women getting hired and thus philosophy having a better gender balance. Commentators above point to anecdotal […]

The "existing text" that your spell check operates on is written by you (I assume and you must as well, given the grammar of your […]

Yeah, this all rings true, given my experience playing with GPT-3. I agree that it's important not to fetishize LLMs. They're very good at a […]

I use automated spell-checking and grammar-checking when I write, as do most of us (I assume). Those tools are less fancy and new than GPT-3, […]

They could write their first drafts without the aid of the LLM, then participate like everyone else. It would actually be pretty cool to run

I appreciate the offer—I’ve read and benefited from several of your interviews, and McKeown’s remarks certainly resonate.

I find the claim in your second sentence very plausible. (That’s obviously bad. I’m all for your main cause. The only thing I’m taking issue […]

Dialogues on Disability is a series of interviews with disabled philosophers that I have run for several years. On the third Wednesday of each month, […]

Grymes, your remark is interesting because it suggests that passing as nondisabled on the job market is required to get a job in philosophy. In

“Our epistemic authority, even about our own lives, is repeatedly undermined or at least cast into serious doubt.” Indeed—this is just what your own post […]