The recent wave of student protests in the United States have focused on a range of issues related to the status and treatment of racial minorities and other vulnerable parties on campus. One issue that has come up on several occasions are the ways in which universities have decided to honor various historical figures—for example, by naming buildings after them, or having statues of them.

Last week, students at Princeton University were protesting the university’s prominent recognition of Woodrow Wilson. Wilson was president of Princeton prior to becoming president of the United States, and Princeton has a college and a school named after him. Though he was a progressive on many matters, as Inside Higher Ed reported, “historians have also noted that he was an unapologetic racist who took many actions as president of the United States that held back even minimal rights for black people.” Recent protests at Georgetown focused on the fact that one of its buildings was named for a former university president who sold off some of his slaves to a plantation to pay the university’s debt. And now, IHE reports that at the College of William & Mary and the University of Missouri, “critics have been placing yellow sticky notes on Jefferson statues, labeling him—among other things —‘rapist’ and ‘racist.'”

These developments may have some people wondering what the appropriate stance is towards honoring historical figures who have held what are today understood to be highly objectionable views, or acted in highly objectionable ways. To shrug off the concerns and say “no one’s perfect,” seems insufficiently sensitive to the ways in which such honors might contribute to an unwelcoming environment for some students. Yet to require historical figures to be morally unobjectionable by today’s standards in order to be honored seems unduly strict and inflexible. We might recall that even moral heroes are not morally perfect (see, for example, Lawrence Blum’s “Moral Exemplars” essay).

I am not aware of work on the ethics of honoring historical figures. Perhaps this is an area in which philosophical expertise can help clarify an issue of current pressing concern. Thoughts welcome. 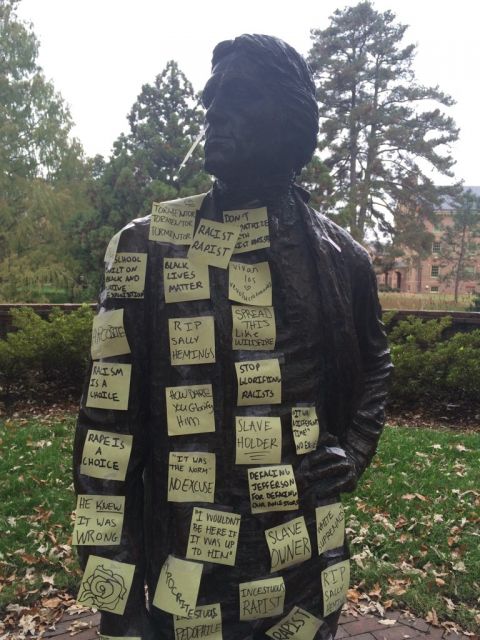