Over at the Splintered Mind, Eric Schwitzgebel (UC Riverside) reports on research he has conducted into the participation of women on the main programs of the meetings of the American Philosophical Association (APA). His findings reveal an upward trend: women’s participation in the 2014-15 meetings, at 32%, was twice that of 40 years ago. He also broke down the sessions into ethics and non-ethics and confirmed that the percentage of women participating in ethics sessions is higher. 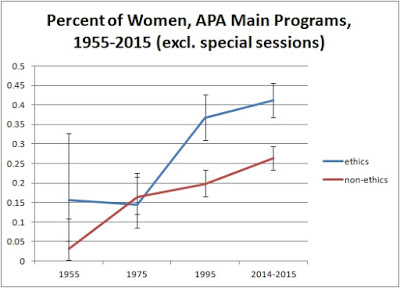 There’s more, including data that “tends to disconfirm the hypothesis that women are disproportionately likely to appear in lower-prestige program roles,” at the original post.