Frederick Charles Beiser (Syracuse) has been awarded the Cross of the Order of Merit of the Federal Republic of Germany, “honoring his lifelong teaching of German philosophy to American students,” according to a press release from the German government. It adds:

Professor Beiser has been critical in introducing important works of German philosophers from Kant to Fichte to an English speaking audience and has sparked an interest for Germany through his words and actions…. Through his work, he not only spread the word of famous philosopher Kant who is mostly known for his words “May you live your life as if the maxim of your actions were to become universal law” —but also lived his own life by example. Along with teaching German idealism, he has also been engaged in various committees promoting student exchange between Germany and the United States of America. 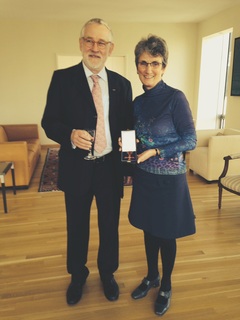