Anna Stubblefield, a professor of philosophy at Rutgers-Newark, was found guilty of two counts of felony first-degree aggravated sexual assault for raping a mentally disabled man she was introduced to in order to help him learn to communicate (previously). NJ.com reports:

The jury… convicted the 45-year-old philosophy professor of sexually assaulting a 34-year-old disabled man, known as D.J., who has cerebral palsy and is unable to speak beyond making noises. Psychologists have determined he is mentally incompetent and cannot consent to sexual activity.

Stubblefield had claimed she and D.J. fell in love, saying he is not intellectually impaired and was able to communicate through a controversial typing method, known as “facilitated communication.”

But after less than three hours of deliberations between Thursday and Friday, the jury ultimately determined D.J. was unable to consent to the sexual acts in Stubblefield’s Newark office in 2011 and found her guilty of two counts of first-degree aggravated sexual assault.

Stubblefield is now facing between 10 and 40 years in state prison when she is sentenced on Nov. 9.

The rest of the report is here, including background on the case. 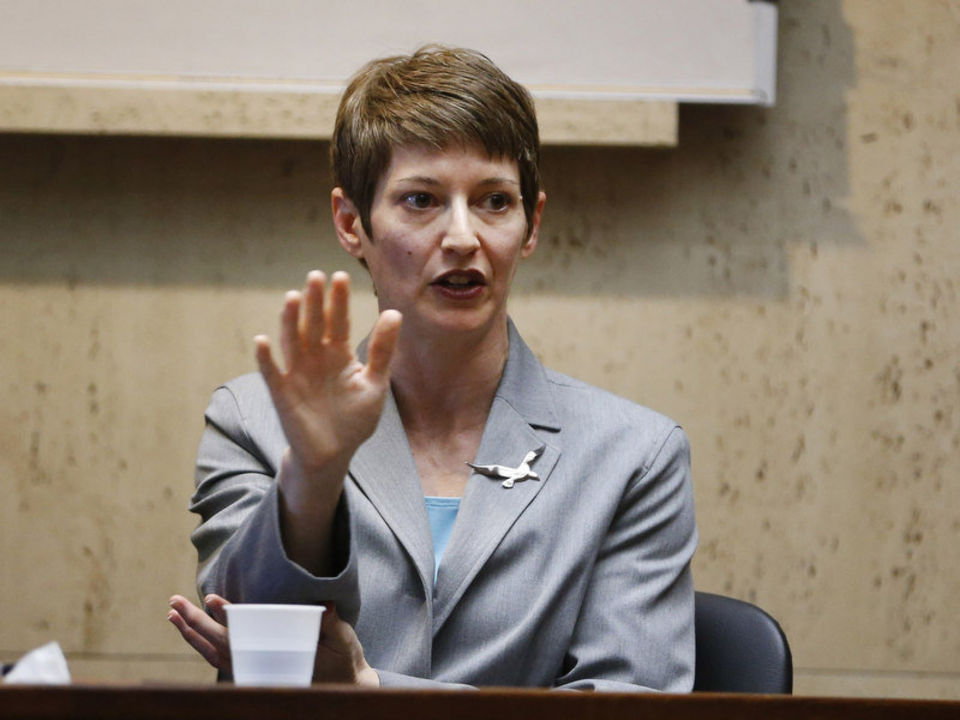 (photo of Anna Stubblefield, by Ed Murray of NJ Advance Media for NJ.com)

Fwiw, rape and sexual assault in the first degree are generally not interchangeable. The former requires force, the second (merely) requires lack of consent. New Jersey actually does run them together, so you’re right. I had to look it up, though; it’s my understanding that’s not a common approach.Report

I believe New Jersey has no such crime as ‘rape’.
I was on a grand jury in NJ and that’s what the ADA told us. She explained that jurors are too likely to have their own preconceptions of what counts as ‘rape’, so they replaced that crime in the statutes with first degree sexual assault, on the theory that jurors would accept the definition the judge gave them.

Of course, that was 27 years ago.Report

According to FindLaw, “In New Jersey, sexual assault is the legal term for rape.”

Be that as it may, in some jurisdictions there is a difference. And even where there isn’t a *legal* distinction, these two terms still have different conversational implications. Arguably they shouldn’t, but they do. I think it’s a distinction worth attending to, and that the accurate term should be used.Report

I’ve changed the title of the post. Thanks for the feedback.Report

What the hell Justin. What on earth is the merit of changing the title? She was charged and convicted of rape by any definition; it just so happens the word for that in NJ is sexual assault. Who ever said that rape “required force”? Lack of consent equals rape. That’s why for example men who have intercourse with for example drunk and incapacitated women at frat parties are guilty of rape.Report

Taking into account the comments by Fritz and Jeff, I decided to use the term the court used. That’s all.Report

But Fritz’s comment contained the erroneous claim that rape “required force.” That shouldn’t stand uncorrected or be tacitly endorsed by your following his suggestion.Report