British photographer David Slater traveled to the Indonesian island of Sulawesi, came across some macaque monkeys, and set up a camera with a tripod. One of the monkeys, Naruto, reportedly pressed the button on the camera, with the result being several photos of Naruto. Here’s one: 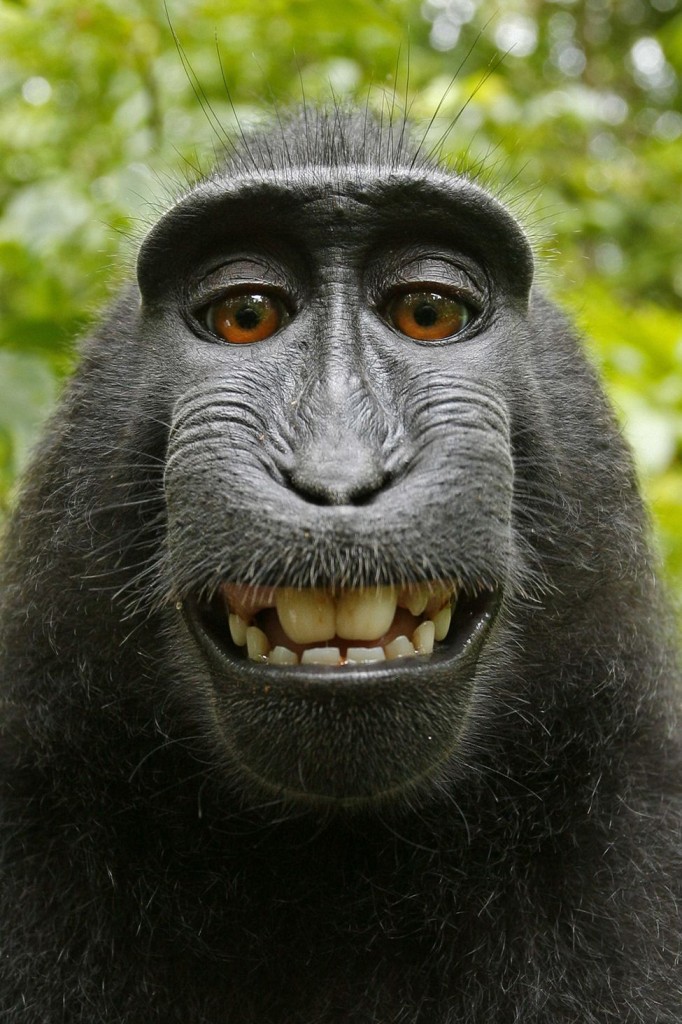 I think he needs to work on his squinching.

Anyway, Slater put this and other photos in a book, Wildlife Personalities. He now finds himself the target of a lawsuit from People for the Ethical Treatment of Animals (PETA), who claim that since Naruto pressed the button on the camera that resulted in the photos, Naruto owns the copyright on the photos. Jeffrey Kerr, PETA’s general counsel, says: “The act grants copyright to authors of original works, with no limit on species… Copyright law is clear: It’s not the person who owns the camera, it’s the being who took the photograph.”

So that’s interesting, but check out the interview of Kerr at Motherboard. Here are some of the good parts:

How does an animal have standing in federal court on a copyright issue?
Well that’s what we’re arguing. It’s clear that the Copyright Act provides protection for authors of original works and it’s clear by Mr. Slater’s own admission that Naruto is the author of this work. And so we are representing Naruto as his Next Friend because he, like, other parties, can’t come to court on their own. But that is the issue that we believe Naruto should be given copyright protection in this photo in this case.

Does Naruto know about this lawsuit?
[pause] Um, the… fact here is that Naruto is unable to come into court himself and so we are standing as Next Friend. Your question is silly, frankly. The issue is as I’ve stated it.

If Naruto, as you say, intentionally aimed the camera at himself, but—and here, you haven’t quite answered my question—let’s say he doesn’t know the selfies exist—could it be that he intentionally made a selfie?
Yes, of course, the fact that someone engages in particular conduct that results in original work of art that is protectable under the copyright is sufficient. So, I have answered your question, with respect.

So you saying that you think Naruto knows these selfies exist, because he—
That’s not what I’m saying and you should not report that. What I am saying is, alleged in the lawsuit, that Naruto engaged in a series of purposeful, intentional actions. He is very bright. He was aware of the cause and effect relationship between pushing the shutter, his reflection in the camera—this is all admitted by Mr. Slater. The result of his conduct, the original works fixed in a tangible medium, resulted. And that is sufficient for copyright protection.

Can a photographer intentionally create a photo if they don’t know how a photo results from a camera?
Yes, of course.

Like if I took a machine and I didn’t know what it was for, and I fiddled with it, intentionally knowing that this is what someone was doing with it, but I didn’t know what the output was going to be because I had never seen the output, could it be that I intentionally created that output?
There are all kinds of different hypotheticals, but this case is about what we know and the facts that are laid out in the lawsuit, and that is what I’ve already said and will repeatedly say: which is that Naruto engaged in a series of intentional acts, and understood the cause and effect relationship of his actions, and his reflection in the camera… it is acknowledged by Mr. Slater numerous times. And the result of that conduct are the monkey selfie, which we believe he should be the author and copyright owner.

Kudos to Sarah Jeong and others at Motherboard for asking some good questions. How do you think Kerr did?

I think the importance of this is that it reflects our dawning realization that at least some nonhuman beings can “engage in a series of purposeful, intentional actions.” Waking up from our Cartesian trance whereby only us humans are intentional beings and everything else just mindless clockwork is several centuries overdue.

Copyright issues are another kettle of fish. We also need to wake up to the fact of how entirely socially constructed our systems of economics and law are, and go from there to figure out how we can best organize them in the direction of enhancing the lives of all intentional living beings, rather than the reverse.Report

I can’t think of anyone who adopts the stark Cartesian view you describe these days (and they haven’t for a long time). Just read some Anscombe (or anyone else even remotely aware of the Aristotelian tradition). They employ a very useful distinction between what an agent does voluntarily and what an agent does intentionally. Animals act voluntarily all the time. And voluntary actions are actions for which the agent is responsible (and they can be subject to praise and blame for them).

Really, does anyone think animals are just mindless clockwork?Report

Sorry, I did not see your reply when you sent it out. “Really, does anyone think animals are just mindless clockwork?” Well, I’m glad that you say this, but I think the answer seems to be yes and no, for the general citizenry and even for most philosophers. When people interact with their household pets, in the course of their day-to-day lives, of course they don’t; did anyone really think that “Robodog” was going to catch on? But the default metaphysical scheme still seems to be Cartesian. How else could we tolerate the massive factory farms that imprison billions of sentient animals? How else could we continue destroying “biodiversity” apace, seemingly under the assumption that we are somehow ontologically apart from it?

If it’s really true that no one accepts “the stark Cartesian view” anymore, what does our highly abstract academic metaphysics/ontology offer to replace it? I think it’s really important for us to officially acknowledge that Cartesianism is really dead–way overdue–and get this message out to the public and out into western culture. Biological science has surely progressed far beyond it, but we haven’t integrated that message into our society yet. That’s what I think those who would call themselves metaphysicians or ontologists should be working on, not playing their stultifying little intellectual word games. It’s time we started talking about lived reality again!Report

“Does Naruto know about this lawsuit?”. Indeed, what kind of question is that? Assuming that it’s obvious to everyone involved that Naruto does not know about the lawsuit, this can only be a rhetorical device to suggest that the whole idea that Naturo took the selfie is preposterous. I find this, and other similar moves by the interviewer, not very nice, to say the least.

It’s not at all preposterous that Naturo was acting intentionally in some broad sense, and that might be enough to make them the author of the picture, but I have read Slater give a different, and I think more interesting, argument in his favor: even if Naturo took the pic, it was him (Slater) who prepared the whole setup, chose the very spot where it was taken, etc., and it is this kind of preproduction that should count for copyright in this case.Report

I agree that the interviewer’s tone is mocking, but I think mockery is appropriate here. The system of copyright is justified by the incentives it creates; it gives artists incentives to create by letting them know that they’ll be able to control access to their creations. Nonhuman animals do not respond to such incentives, so there’s no justification for interpreting the law so that it applies to them, regardless of whether Naruto can be said to have acted intentionally, in some sense. The only legal question here is whether the photo should be protected by copyright at all, or should go immediately into the public domain. I don’t know the relevant case law, but I hope Slater gets the copyright, because I hope other artists in the future are encouraged to engage in projects like this.Report

I thought that the interviewer had a point in pressing her line of questioning re: Naruto’s knowledge of selfies. At least per my intuitions, authorship requires more than just the performance of a series of intentional acts that causally results in the production of an original work. It seems to me that there the production must figure into the intentions of the acts in some minimal way and there must be a minimal conception of what one intends to produce. Otherwise, the production would be a complete accident from the perspective of the agent, something for which the agent cannot be held responsible (of course, there are cases where one is responsible for their ignorance of foreseeable effects, but I think we can set those aside here). And insofar as authorship involves responsibility, the agent would not rightly count as the author of a work produced in this way. From the interview, it doesn’t seem like Kerr is claiming anything so strong as the possession of productive intentions and a conception of the output of the series of actions performed on the part of Naruto. While he claims that Naruto “understood the cause and effect relationship of his actions”, he is also demure on the question of whether Naruto understood that the creation of a selfie or photograph would be among the effects of those actions. I would guess that he would also hesitate to claim that Naruto’s intentions were substantively productive, even though his case rests on the claim that Naruto’s actions were intentional. Of course, all this would be irrelevant, even in a moot court, if copyright law does not track these intuitions about authorship.Report

Is there existing precent for ownership of art created (at least causally, if not clearly intentionally) by very young or severely disabled humans–e.g., in a preschool/daycare setting, or perhaps an art therapy class, or something like that? That would seem to be a natural place to look.Report

The most important question here is obviously whether our aspiring photographer friend was named after the anime or character Naruto.Report

Seems a slightly odd case to take on given that there are places where elephants paint pictures. The nature of the intention and causation would surely be clearer there?
” The system of copyright is justified by the incentives it creates” – I’m not certain this is 100% right. I think it is the case for patents, but with copyright there is also the bit referred to as the moral right of an author to be identified as the creator of a work. But seeing as Slater does explicitly identify Naruto as the creator/button presser, that may not constitute any ground for disputing Slater’s actions.Report