So reports the American Academy of Arts and Sciences via its Humanities Indicators project: 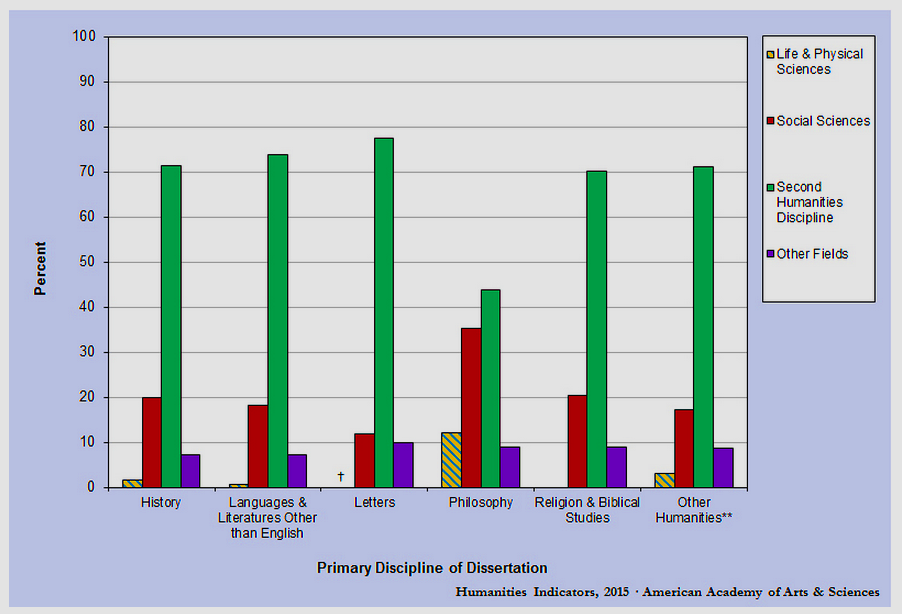 The project also reports that in the humanities, “the proportion of doctorate recipients reporting interdisciplinary research rose rose from 26.5% in 2003 to 43.5% in 2012.” The rest of the report is here. (Via Inside Higher Ed)

Nicolas Delon on Oldest Professorship in Philosophy Gets New Name

My comment was in jest. I don't doubt he has good intentions. It's just an odd sentence. As you note, philosophers like Williams, Broome and

Justin Weinberg on Oldest Professorship in Philosophy Gets New Name

I think a more charitable interpretation of the passage you quote is that Mr. Sekyra is noting the absence of philosophical discussions about morality in

Nicolas Delon on Oldest Professorship in Philosophy Gets New Name

I often wonder why we so rarely ask ourselves how to live a good life, what constitutes moral progress, what our responsibility is towards future […]

John on How Can Departments Support Grad Students in Labor Disputes?

Thanks for your reply. I admit I was overlooking that there are research institutions that have different arrangements, like Dartmouth. Though, unless I'm mistaken, Dartmouth […]

Love the series so far. Is there anything to suggest that Lewis regarded himself as autistic, or has anyone who knew him well suggested this […]

Sorry, I meant the *Department of Philosophy* at the University of Toronto will neither require nor consider GREs. I have no knowledge of what's happening

The University of Toronto will neither require nor consider GREs.

David Wallace on How Can Departments Support Grad Students in Labor Disputes?

I’m pretty sure it’s correct for Pitt specifically, because it came up in the recent unionization vote. But I can well believe it varies both

Aaron V Garrett on How Can Departments Support Grad Students in Labor Disputes?

The designation of chairs and professors as "management" is an anti-union strategy by universities. It's of course complete nonsense, insofar as they are trying to

Lisa Shapiro on How Can Departments Support Grad Students in Labor Disputes?

I'm sceptical about the claim that Chairs are not permitted to be part of faculty unions. At least at my university, the cut off for […]

David Wallace on How Can Departments Support Grad Students in Labor Disputes?

"The amount of lay-speculation about the law in this thread is a bit surprising, considering how silly that speculation almost always turns out to be." My […]