“Sleeping Beauty” papers “lie dormant for years before experiencing a sudden spike in citations as they are discovered and recognized as important.” A recent article in Nature discussed scientific papers that have slumbered for decades, as well as a way of assigning a “beauty coefficient” to papers.

The coefficient, B, is “a value based on the number of citations a paper has received and how long after publication it gained them. A paper that accrues citations linearly over time scores 0, but one that languishes for 100 years before rising to fame could score higher than 10,000.” According to the article, the scientific paper with the highest B was published in 1906, and did not “awaken” until 2002 (it’s “‘Concerning adsorption in solutions” by H. Freundlich).

Are there sleeping beauty papers in philosophy? (I mean, of course, besides that paper of yours from a few years back that no one has cited…yet.) Which have slumbered the longest? Who was their “prince”?

Perhaps the initiative at Ethics to revisit articles from its first one hundred years will awaken more beauties.

UPDATE (6/27/15): Kieran Healy (Duke) uses his data-wizardry to find some sleeping beauty papers in philosophy. His dataset contains contains 2760 articles—all of the articles published in the Journal of Philosophy, Mind, Nous (including its supplements), and the Philosophical Review between 1990 and 2014. His analysis, which includes the creation of a graph depicting the citation growth curves for the articles with 30 or more citations, discovered four plausible candidates for sleeping beauties.  The graph is below. To learn which papers are the sleeping beauties, head on over to Healy’s site. Thanks, Kieran! 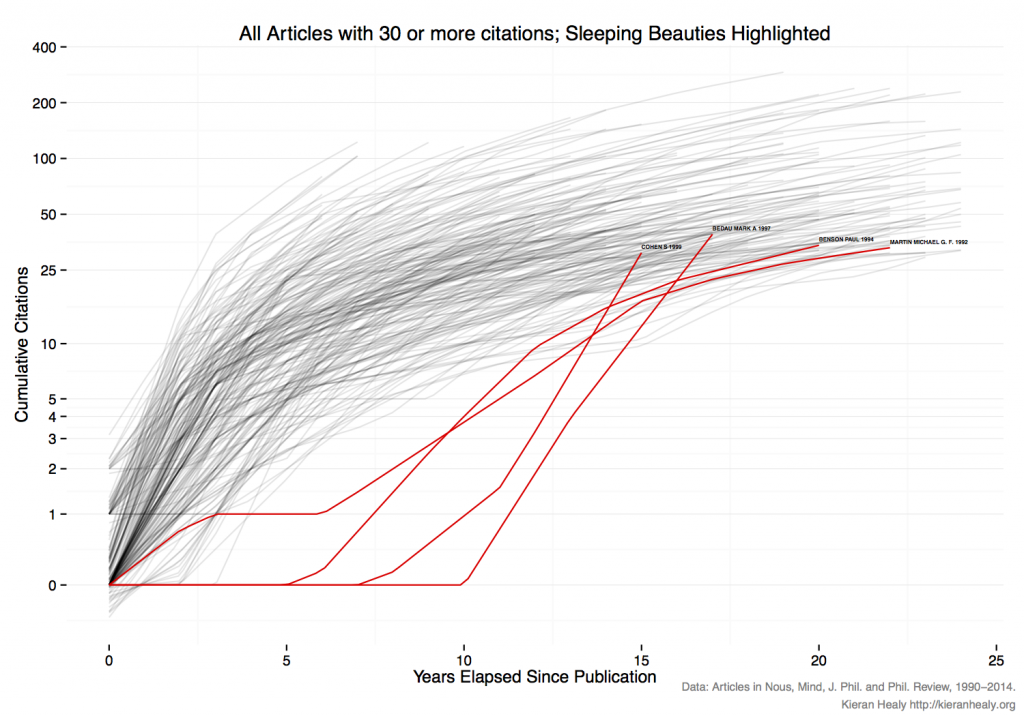 The coinage of “sleeping beauties in science” is due to a Dutch bibliometrist, prof. van Raan. He wanted to check whether there was any ground to believe scientitist with “Mendel syndrome”: those who claim that their work is ahead of its time. He found that in some cases this assessment may be correct. 🙂 The current study in addition makes clear that often the reviving citations come from a different field of study.
The authors of the PNAS article used the Web of Science database, so some philosophy publications were represented. As far as I can tell, there is no philosophy in the top-100 (on the website of first author: https://qke.github.io/projects/beauty/top_beauty_wos.html). Maybe we should ask the authors to look at a philosophy database!

Small remarks:
– It’s not really an article in Nature, rather an article in PNAS, which was covered by Nature news.
– The author of the sleepiest beauty was Freundlich (not Fruendlich)Report

Basically everything written by Anselm W. Müller, who was once commended by Anscombe as “one of the ten most talented philosophers I ever met” but then unfortunately disappeared into the relative obscurity of German academia.Report

From the headline, I expected this to be about articles on the Sleeping Beauty problem.
There’s an ambiguity which isn’t resolved by using citation rates. When an old paper becomes something that everybody cites when introducing a topic,that might be because it genuinely influences or anticipates recent developments. But it might just be that it ends up being one of the standard exemplar citations; that is, an author cites it because doing so signals something to contemporary readers. The latter kind of citation is decorative plumage which depends more on recent social conventions than on the content of the old article.Report

H.A. Prichard’s essay collection Knowledge and Perception has been sleepwalking a bit lately, ever since Williamson cited it in Knowledge and its Limits.

But if we’re looking for real sleeping beauties, the most beautiful is probably Hume’s Treatise!Report

Anscombe’s Intention is surely one of the most significant sleepers over the past decade or so. (So perhaps I should say it was a serious sleeper until HUP reissued it and Moran, Thompson, Müller and others starting publishing on it.) Related, though more a completely ignored work than a sleeper, when I was writing a dissertation in the philosophy of action I came across the following article. I had never heard of at the time and have not seen it referenced since:

I think it’s a really good article and one that resounds with the recent resurgence in Aristotelian approaches to action generated by renewed interest in Anscombe.Report

Edward Craig – Knowledge and the State of NatureReport

Who will confess to having one of their papers be a wide awake beast?Report

How about everything by Schiller Joe Scroggs?Report

He wrote no paper that did not become a classic of modal logic.Report

A great deal of the important early experimental work on interoception was done in Soviet Russia in the first half (or so) of the 20th century. In general, it would/could/should be of interest to philosophers interested in affect and emotion. One paper I know of that provides a somewhat philosophical discussion of some of this (very Pavlovian ) research is: Airapetyanz, E. and Bykov, K. (1945) Physiological Experiments and the Psychology of the Subconscious. Philosophy and Phenomenological Research.Report

There are changes in access that are already making a difference to citations or just general utility. I don’t want to claim anything so grand as calling my stuff “sleeping beauties”, but PhilPapers and Academia.edu have made some of my early papers on hate speech more accessible, and so they are getting increasingly greater circulation, (especially “Derogatory Terms”). No info about citation rates, but access matters too. I suspect my experience isn’t unique, especially for papers that were published in collections. It seems there is a tipping point on citations–certain papers become required and then the rich get richer. Internet access gives us more access to innovative ideas that might be published in odd places, and that’s cool, even if they don’t become major influences.Report

Gottlob Frege, The Foundations of ArithmeticReport

Next up, Dorian Gray Papers: papers that are ridiculously dated but people keep citing as if they were still relevant.Report

John Earman writes in “Reassessing the Prospects for a Growing Block Model of the Universe” that “Broad’s [1923 “Scientific Thought” growing block model] languished for several decades in a philosophical backwater. But it
was revived and vigorously defended in Michael Tooley’s book Time, Tense, and Causation (1997).”Report

Not exactly a paper, but quite a beauty: Bolzano’s ‘Theory of Science’. While still half asleep, the recent publication of the English translation will hopefully let it rise and shine soon.Report

Hi, I am coming from this discussion from outside of mainstream philosophy, but thought I’d contribute a suggestion based on the criteria for a Sleeping Beauty paper. At least, among other people in my film studies unit, no one really talked about Descartes until the Matrix, and after the Matrix, it seems now film people are citing his paper ‘The Meditation’–it seems that without the Matrix, (and the success of the whole Trilogy in fact) Descartes would continue to remain uncited, at least as far as I can tell.Report