Tommy Maranges, AKA Philosophy Bro (@PhiloBro) has written a book. It’s a translation of Descartes’ Meditations. A translation into which language, you ask? Modern vernacular. Or, as the kids say, “as the kids say.”

His version starts off with:

HOLY SHIT FUCK ME, it feels like my eyeballs are going to explode. I barely remember shit and I lost my phone, I blew the entire Spring Break budget in one night and all I have to show for it is this fucking terrible hangover.

The author is on Spring Break, and the night before had mistook someone in a bar for his favorite lacrosse player, Paul Rabil.

The idea behind is volume is to have a traditional English translation and his version of the same part on facing pages. Something like this, I imagine: 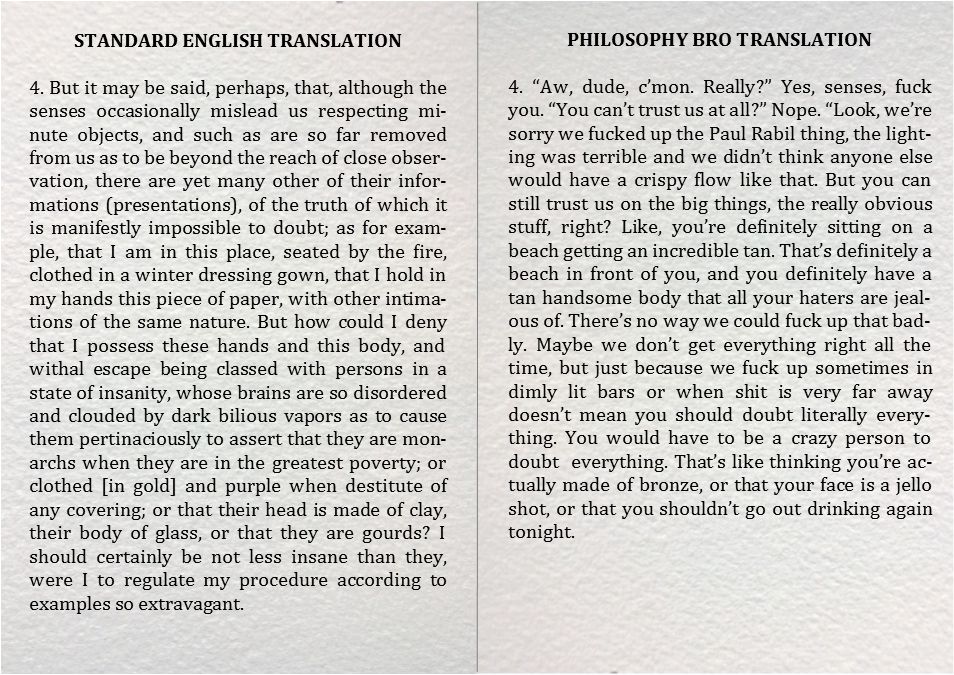 (The left column is from here and the right is from a sample of Philosophy Bro’s manuscript.)

It’s funny. But is it just that, or is it also part of the future of philosophical outreach?

Maranges is raising money to publish his book. Here’s his promotional video.

You can contribute to the project at its Kickstarter site.

Why Tommy, why? I dunno, get Urban Outfitters to sell it I guess?Report

In critical studies of religious scriptures there is a sharp distinction between translations and paraphrases: the former attempts to reduce worries about the indeterminacy of translation as it far as it can, and the latter trumpets evangelism of basic message over accuracy. I guess I wait for someone to convince me this is fallacious.Report

And that’s an unsurprising worry in religious studies, with attempted but less than complete secularization, as revealed in its overvaluation of the value of original text and author, an overvaluation implying that it’s sacrilege to misinterpret or misuse a source, in turn implying that the source is sacred.

Fortunately, for those of us reading non-sacred texts written by just some old dude, who gives a shit, bro?Report

I’ve recounted this story in a different venue, but it applies here.

A (respected, Phil Review-er type) former prof of mine in grad school once quipped after a strenuously meticulous seminar on phenomenalism that “Of course in my undergrad course I teach a totally fallacious Berkeley.” He was not kidding, and that stuck with me. I’m not down with dumbing-down, even to lowly undergrads. Summaries and paraphrases can be better or worse, and while I certainly can’t say that this OP effort is either–it may be brilliant for all I know–it is a question I’d like addressed.Report

I’ve described the Meditations as Descartes’ blog many times.Report

“Summaries and paraphrases can be better or worse, and while I certainly can’t say that this OP effort is either–it may be brilliant for all I know–it is a question I’d like addressed.”

Fair enough. If you go to the link you’ll find the author has made available the entire first book for preview. You’ll also find many shorter summaries of other philosophers on his website. That will give you some sense of the quality.

My own view, having read the guy’s work before, is that his interpretations are surprisingly accurate and not really “dumbed down” at all. They’re often quite insightful for non-beginners. And he’s hilarious.

But I think there’s a place even for “dumbed down” oversimplifications for drawing interest without intimidating beginners–as long as they don’t implant serious errors that prevent improving that introductory understanding.Report