Plus, an online magazine that “aims to introduce readers to the beauty and the practical applications of mathematics” has an interesting article on whether mathematicians will ever be replaced by computers. The article, “The Future of Proof,” by Marianne Freiberger and Rachel Thomas, reports on a recent British Applied Mathematics colloquium on the topic, and introduces competing initial thoughts that are likely to come to mind:

Are mathematicians ever going to be replaced by computers? If maths was all about routine calculations, then the answer would most definitely be yes. But if you’ve ever tried to come up with a mathematical proof, or even played with a logic puzzle, you know this involves intuition and leaps of imagination you’d think are beyond any computer. Even just deciding which kind of questions are mathematically interesting, and which are boring or beyond reach, seems to be something that needs human input.

The article discusses ways in which computers have been put to use in mathematics, but holds out for a distinctly human role:

What differentiates human mathematicians from computers (or perhaps even computer scientists) is not only that they like their proofs elegant and beautiful. They would also like them to provide some insight into why a result is true. And they discover proofs in what seems to be a uniquely human way, for example through high-level associations with other areas of maths or science that a computer in its mechanical myopia (apparently) has no chance of making.

I am skeptical of their skepticism regarding what computers will be able to do, but leaving that aside, they do close with some interesting questions:

What are proofs for? Are they merely certificates of truth, or should they reveal why something is true? For many mathematicians, proofs that explain why something is true hold the greatest value. Could such proofs ever be achieved by a computer? And what would that be worth anyway, if no human could ever understand that explanation?

The essay got me wondering about the extent to which we can imagine computers doing philosophy. After all, some philosophers understand their enterprise as more akin to math than to the humanities or the sciences. And with likely developments in artificial intelligence, at least some philosophical work could be done. Not just formal logic, but also the identifying of implications of various propositions or principles, the construction of counterexamples, the devising of thought experiments. After all, while a human could come up with this— 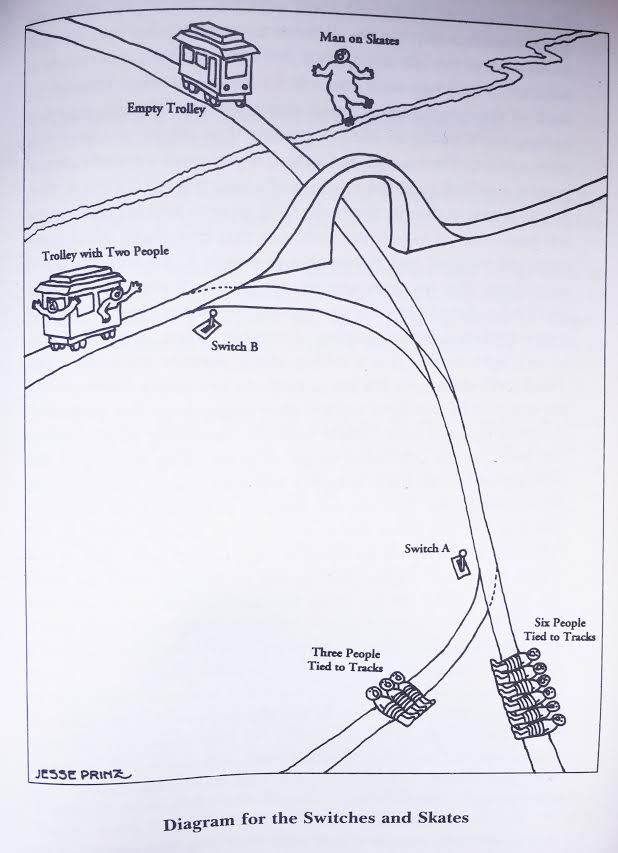 (illustration by Jesse Prinz in Peter Unger’s Living High and Letting Die) —imagine what a suitably sophisticated computer could do. Additionally, advanced artifical intelligence may understand humans well, and be able to provide us with substantive philosophical content that resonates with us. Maybe we will find that forms of artificial intelligence are better than humans at philosophy. Or is that to misunderstand what philosophy is about?

Thoughts on these and related issues are welcome. I imagine that the subject has already been written on elsewhere (I recall, I think, Nick Bostrom discussing this but I cannot recall where), and perhaps computers are already being used to generate philosophy (rather than being used as mere tools by human philosophers). If so, please provide links in the comments.

Also relevant is the post from last month, “The Distant Future of Philosophy.”

(image: three works of art made by a computer programmed by philosopher Hiroshi Kawano in 1964)

I can’t resist pointing to XKCD’s excellent treatment of this issue:
https://xkcd.com/1046/Report

One of my goals for future research is to design a software that offers explications for certain terms in natural language and then devises counterexamples. That is a tough job, and I’m describing the challenges and possible ways to circumvent them in a paper I’m working on right now.

But there is some work that has already been done on drawing consequences of certain philosophically relevant theses, using automated theorem-provers. Check this project by Zalta et. al.: https://mally.stanford.edu/cm/Report

Subversive thought: I think that the prospect of “computers doing philosophy” is not *too* far from where are presently. This is not because silicon chips are all set to be engaging in the Cogito (and I say this as someone who worked in AI for two years in the early 00’s), but insofar as human ‘knowledge production’ itself is becoming more mechanistic and hidebound by externally imposed rules and controls (‘technization’ I believe is the Heideggerian term. Good work on this is being done at University of Melbourne by Peter Woehlert.) A ‘computer’ was originally a person deriving complex answers by means of a predetermined formula.Report