The first ever issue of the Journal of the American Philosophical Association is now available online. According to a press release from the APA, “All current APA members have free online access to the journal. Members will also receive a complimentary copy of the journal in the mail.” The journal is published by Cambridge University Press. The journal’s editor-in-chief, John Heil (Washington University in St. Louis), has been blogging about the journal. He writes:

Our challenge is to ensure that a journal purporting to represent the full gamut of topics and approaches to philosophy succeeds. We will inevitably make mistakes. We will inevitably offend the easily offended. We believe, however, that we will achieve these goals by offering a vehicle for fresh, accessible scholarship governed by an editorial process designed to expedite decisions and have papers in print quickly.

The contents of the inaugural issue: 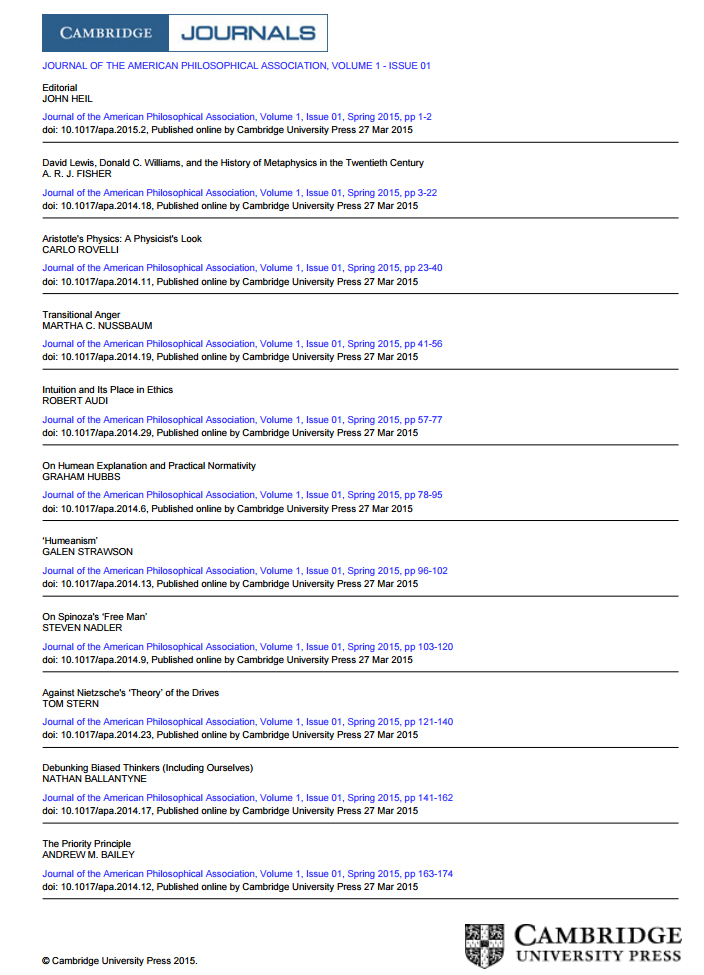 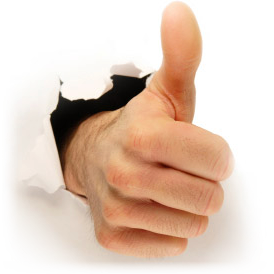 Well, here we go. Only one woman and a bunch of senior white dudes. Is this going to pass the muster with certain circles?Report

The screenshot you’ve posted omits one paper from this issue: Chad Engelland’s “Heidegger and the Human Difference”.Report

A direct link for those without an APA login: http://journals.cambridge.org/action/displayJournal?jid=APAReport

I’ve only so far read the one on Aristotle’s physics, but I found it really educational! I was glad to learn both of the ways that Aristotle’s physics can be thought of as a sophisticated empirical system that really is a certain sort of limit of Newtonian physics for objects immersed in fluid at the surface of a spherical planet, and also to see some general discussion of different ways that history of science can be of interest.Report

On Sherri’s question, I’ve read a couple of the essays, and I don’t think they come anywhere even remotely close to that stated mission.

Of course, it’s an extremely ambitious mission, so maybe they didn’t get any submissions that qualified. But from what I’ve read so far, frankly, it doesn’t really look like they’re trying. I’m sure they could get closer.

I’m disappointed. I was impressed by the early strong statement of such a goal so out of step with the conservative nature of this profession.Report

Given the tiny sample size that any one issue represents, can we give it at least four issues, one whole volume, before we start judging? (Wait a sec…I’m not in the blogosophere, am I?)Report

Dee, of course it’s too soon to make any strong judgments. Only time will tell. But I don’t think a failure to meet its stated mission leads to any particularly strong judgments. It can fail to “break new ground…go out on a limb…set trends” and still be an excellent journal.

At the same time, however, when they trumpet such ambitious goals from the start, I think it’s reasonable for readers to be watching for progress toward them from the start.

It may well be a strategically good move: start with many well known figures and not take too many risks, in order to earn the good will to take more risks later.Report

Anon, I didn’t mean to be talking about strong judgments (I’m not sure what those are!) or judgments of excellence. What I was suggesting is that we don’t know yet whether it has failed to meet its stated mission or whether it has made progress from the start. The sample is still too small (and quite possibly unrepresentative, given the value in starting with prominent pieces) for us to have a meaningful start to assess. We wouldn’t draw any conclusions about progress or mission-accomplishment from the first few polling numbers of an election, either.Report

Dee, in that case, then I guess I just completely disagree.

I think high ambitions demand more exacting evaluation. This sample can’t possibly be unrepresentative, because it is the whole. The whole may change, then a larger sample will be more representative. But a journal is what it does. So far, this is what it does. The sample size is not just not too small, it is *complete*. A basketball team that loses the first point is losing the game.

If your mission is to publish groundbreaking, risky work, and you start by not doing that, you are, simply, literally, failing your mission. That doesn’t mean you won’t turn it around and succeed in the long run, but that’s a different question.Report

Anon, thanks for the exchange. In my view, the first point of a basketball game tells us basically nothing about who is going to win the game, what it will be like, and so on. So I don’t think that the losing team at that point is losing in any way that is relevant or significant for the things we care about when we evaluate basketball. (If a friend complained about his team being down immediately after it lost the first bucket, I’d think he’d be silly for doing so. It’s a long game.) Yes, it’s representative of the whole game to that point, as it is the whole game; but it’s not often representative of the game that will unfold.

By the way, there are several goals that the journal has. It seems to me very unlikely that anybody could succeed in achieving all of those goals in any one issue. So to say that the first issue has failed in achieving the mission seems very ungenerous, as it seems to require the journal do things in one issue that are meant to be done over multiple issues.Report

Dee, thanks for your reply.

While I agree that the first point in the game tells us very little, I can’t agree that it tells us practically nothing. At the end of the day, the final score consists of a series of single points. At each stage, we’re evaluating the game by those individual points. And at each stage, it’s always possible the game will completely change course.

So, your view might to lead to the conclusion that we’re only justified in judging the game when we can reliably predict who will win, since only then can we with rely on the overall weight of the current score–e.g., when there too little time left for the losing team to catch up.

And in the case of a journal, there’s no buzzer, so do we have to wait until it folds? Of course not, but then that means no matter how many issues have been released, our current judgment may always be completely invalidated by future issues. So why exclude early judgment?

I think we do agree, though, that there’s every reason to be hopeful about the future of the journal, since even if the first issue has a little weight, rather than no weight, in evaluating its success, it’s *very* little. So while I’m disappointed that so far I don’t see *glimmers* or *attempts* at fulfilling *any* aspects of its mission, I’ll still be watching in the future for those signs, and not giving up on the journal.

I think, at the end of the day, our real source of disagreement may be your comment that you don’t know what “strong” judgments are. You would rather not make a judgment, while others are willing to make one, but a lightly intended one, a small observation rather than an executioner’s axe, one I’ll happily retract or revise. It’s a “weak” judgment in the sense that I don’t feel strongly about it, don’t feel certain about it, and don’t think it’s very consequential if true, but I still believe it to be true.Report

I have to correct my claim that there’s no progress in “any aspect of its mission.” The first issue does include historical philosophy, which is often ignored by major journals. And it includes two continental topics. Nietzsche is, by now, a safe pick, but Heidegger is a controversial one: many philosophers do not take him seriously, and among those who do, some think his philosophy is irredeemably tainted by his politics.

So, they deserve praise for progress in that goal, and it makes me optimistic that we’ll see more diversity in future issues, particularly more gender balance, as well as non-western philosophical topics.Report