FAZ, one of the main newspapers in Germany, reports on the unraveling scandal regarding Heidegger’s anti-Semitic writings. The latest, I am told, is that Peter Trawny, one of the editors of the Gesamtausgabe, the definitive collection of Heidegger’s works (he edited the now infamous Black Notebooks) has admitted in a recent interview that he was pressured by the lead editor of the works for many years (Friedrich-Wilhelm von Herrmann, who was a private assistant to Heidegger and then continued being the main editor by the graces of the Heidegger family) to delete or reword some possibly incriminating passages from earlier editions he edited [note: see comment 1, below, which claims this sentence is not correct]. Now the publisher, Vittorio Klostermann, wants full disclosure of all such deletions and alterations and is asking all of the editors if they have any knowledge of them or have done any themselves. The concern is not just for the accuracy of the altered editions, but the reputation of the entire Gesamtausgabe.

The article from FAZ, a photo of which (below) was provided to me by a source who prefers to remain anonymous, gives some examples of the suspect edits. One passage referring to the criminal nature of Jews was deleted. Also, an acronym that quite clearly refers to the Nazi party, “N.soz,” was entered into the edition as “natural sciences.”

UPDATE (4/2/15): Below is the letter by Vittorio Klosertmann, mentioned by Peter Trawny in Comment #5. If someone would like to provide an English translation of any passages they think are especially relevant in the comments below, that would be quite welcome. 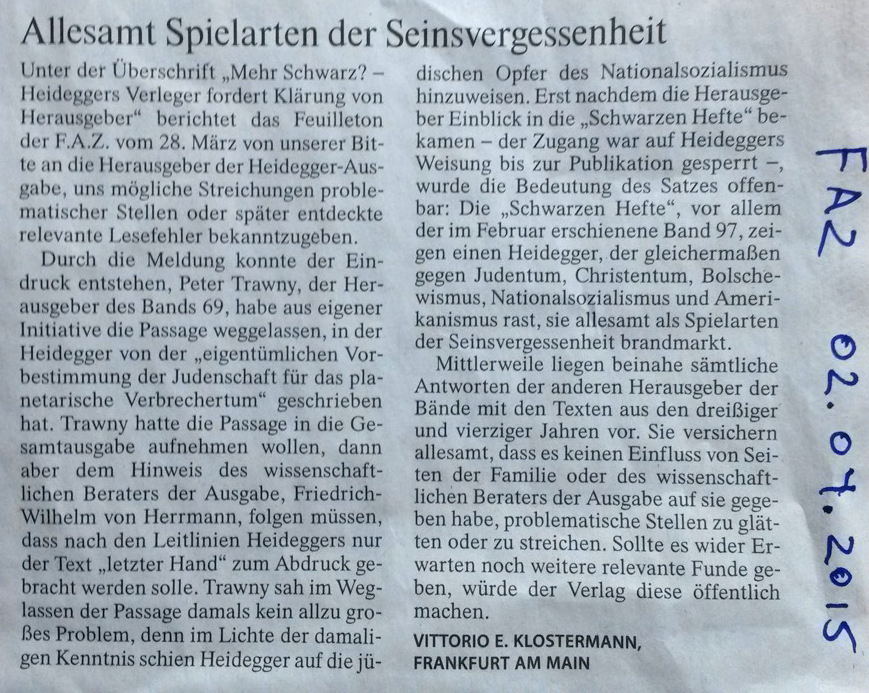 This part of the post is incorrect: “Peter Trawny … has admitted in a recent interview that he was pressured by the lead editor of the works for many years … to delete or reword some possibly incriminating passages from earlier editions he edited.”
P.Trawny has written that in editing GA69 he discovered a phrase in the handwritten manuscript which was not in the typed-up manuscript. He then asked F.W. von H. whether to include that passage (1 sentence) in publication, to which the latter responded negatively. P.T. now regrets having follwed FW von H’s directions.
We have known for a while that FWvonH and his chosen editors intervene in Heidegger’s texts – not just in regards to political statements but also elsewhere, e.g. in Heidegger’s Aristotle courses. Much of this was catalogued long ago in articles by Ted Kisiel.
Heidegger’s collected works are not philologically reliable (unlike e.g. Husserliana). But they have published a lot, very quickly.Report

I’m not sure I would believe a PR spin that this is “old news” that Trawny has already dealt with before. The article: “The publisher points to the fact that in vol. 69 of the Gesamtausgabe, the handwritten passage that speaks of a ‘peculiar predisposition of Judaism toward planetary criminality’ was omitted from the published version. The editor of this volume, Peter Trawny … says that he assumed at the time that Heidegger meant to refer in the passage to the Jewish victims of National Socialism.” That doesn’t sound too good!Report

he assumed at that time …..Report

I am the scholar who found the error in transcription in Heidegger’s 1934/35 lecture course, “Hölderlin’s Hymn’s ‘Germania’ and ‘The Rhine'” (GA39). The mistaken transcription of “N.soz” was––I am convinced––a genuine error on the part of the German editor. For those who are interested, I encourage them to see my recent article, “Naming Physis and the ‘Inner Truth of National Socialism’: A New Archival Discovery,” in “Research in Phenomenology,” Volume 44, Issue 3, pp. 315-346, which offers a philological reconstruction of the manuscript page. The article includes a color copy of this page, which effectively communicates just what any editor of Heidegger’s lecture courses must contend with. My research in the archive shows that many of Heidegger’s political interventions take the form of densely embedded and microscopically written insertions. By contrast, what is graphically remarkable about the “Black Notebooks” is the nearly complete absence of revisions or insertions that are of the type found in the lecture courses. Fritz Heidegger’s typescript of the lecture course reveals a different and more complicated story than what the edited lecture course shows. The problem in this instance was not Klostermann.Report

Please, read my book “Heidegger and the Myth of a Jewish World Conspiracy” (coming out at University of Chicago Press end of the year). There I explain what happened (“already” in 2014) . And by the way: Lorenz Jäger, the author of that article, was not well-informed. There is a letter of Vittorio Klostermann in the FAZ today correcting this.Report

The letter complains that the original report could mislead readers into thinking that Trawny left out the passage about the “unique predisposition of Jewry toward planetary criminality” on his own initiative. It says that Trawny wanted to incorporate the passage into the Gesamtausgabe, but had to follow the instructions of von Hermann that, in accordance with Heidegger’s guidelines, only Heidegger’s own final revisions (the text “letzter Hand”) would be published. But “Trawny did not at that time see in the ommision of the passage any significant problem since in light of what was known at the time, Heidegger appeared to be referring to the Jewish victims of National Socialism. Only after the editor was able to familiarize himself with the ‘Black Notebooks’–access was prohibited by Heidegger until their publication–did the meaning of the sentence become clear: The ‘Black Notebooks,’ above all Volume 97, which appeared in February, show a Heidegger that rages equally against Judaism, Christianity, Bolshivism, National Socialism, and Americanism, all of them being branded as so many varieties of Seinsvergessenheit.” Moreover, the letter continues, all the editors of the various volumes containing writings from the 30s and 40s have given their assurances that they were not pressured by the family or von Hermann to soften or omit problematic passages.

In short, Klostermann feels the need to tell us that when Heidegger did finally reveal, posthumously, his antisemitism, it was in a text in which Judaism is merely one among several forces in Western culture against which Heidegger rages “equally.”Report

I don’t have time, but I encourage every Heidegger scholar (or anti-Heideggerian philosopher) to check the 39th volume in which ‘N.soz.’ is changed by ‘natural sciences’ in order to translate it into English in the way it was originally written (this is, with ‘N. soz’ instead of ‘natural sciences’). This may be helpful to show the real spirit of Heidegger’s work.Report