By now many of you have heard that Kant’s house was spray-painted with the words meaning something like “Kant is an idiot” (the BBC reports that it says “Kant’s a sucker”). The Moscow Times informs us that Kant’s home, in what was known as Prussia but is now Kalingrad, Russia, “is in ruins and has become a hot spot for drinking and debauchery among local youths.”

This is terrible. You figure that if someone was going to spray-paint Kant’s house they would have put a little more thought into it. “Kant is an idiot?” Really? Why not “Spray-painting your house is universalizable”? I don’t know who was responsible for this, but he or she could have done better.

So that such future opportunities are not wasted, I hereby open the thread for suggestions. What should future vandals of Kant’s and other philosophers’ houses say? 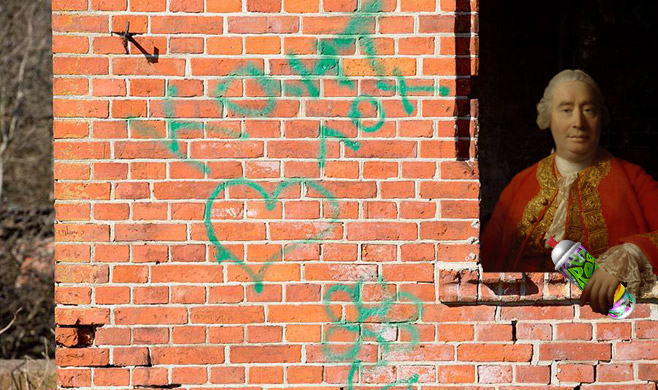 UPDATE 2: The suspect is saying that no one will ever be able to prove he caused this vandalism.

REAL UPDATE: It appears that officials in Kalingrad are planning to restore Kant’s house. Word has it that, among other repairs, the wall between the dining room and the music parlor will be soundproofed.

maybe the vandal was quoting nietzsche in “the anti-christ”?Report

“Will to Powerwash?” (Written in the dust on Nietzsche’s house)Report

On Wittgenstein’s house (in Vienna, not Cambridge): “Schweigen!”Report

On Epimenides’ house: “This is not graffiti”Report

On each brick in Wittgenstein’s house: “Slab!”Report

Is Alastair still on the lam?Report

Well it appears he did visit the crime scene.Report

“Am I doing this with a good will, motherfucker?”Report

Kaliningrad Administration promised to restore the home of Kant, they bought it from its owner recently, in response to this graffiti I am believe. So it is possible a bit too late. Actually, ‘loh’ (лох) is nor idiot, nor sucker… Like in Glinka’s ‘беспечных лохов сонный рой тревожит меткою острогой.’ I was more interested in a heart and a flower as addition to the graffiti. Look like an attempt through publicizing gaining resources for restoration.Report

So, no reason for update? The fact, that home where Kant spent few years and which never belong to him is a big news for world philosophy. But the fact that it will be rebuilt – is not?
dailynous.com – shame on you! It is a pity how easy philosophers fall to russopobic hysteriaReport